US concerned over Afghan ban of security contractors

Some U.S.-funded development organizations,
fearing a worst-case scenario as a result of the Afghan government's ban on private security guards, are beginning to implement contingency plans that could result in those organizations' pulling out of the country, U.S. officials
tell CNN.

The Afghan government decree set a December 17 deadline for unregistered companies to shut down.
END_OF_DOCUMENT_TOKEN_TO_BE_REPLACED 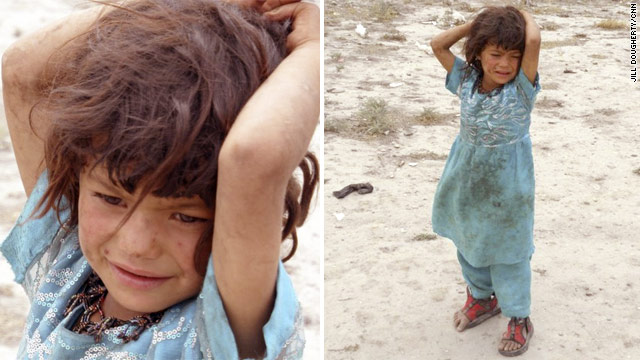 Street children 'bereft of everything'

This is the second time we've seen this little urchin girl. The first time I saw her was near the ruins of the bombed-out Darul-Aman Palace outside Kabul. Totally alone. Filthy. Bereft of everything. Sadly there are so many children like her on the streets of Kabul.

According to UNICEF, there are over 2 million orphans in Afghanistan and twenty-five percent of Afghan children die before reaching their fifth birthday.

Calling for the protection of humanitarian workers in Afghanistan, the United Nations says there have been 47 incidents of direct intimidation of U.N. staff and aid workers in the first six months of this year.

Afghan President Hamid Karzai condemned the stoning deaths of a young man and woman in northern Afghanistan over the weekend, calling the executions by the Taliban "unforgivable."

"Executing these two young people without trial is a crime, an act of inhumanity, and is counter to Islam," the president said in a statement Tuesday. END_OF_DOCUMENT_TOKEN_TO_BE_REPLACED

Inside an Afghan wedding

CNN's Jill Dougherty is invited to attend a wedding in Afghanistan, but there are some traditions outsiders have to observe.

They slowly walk through the gates of a British cemetery, some arm in arm, mostly women and some men dressed in Afghan garb.

They're here to honor Dr. Karen Woo, a 36-year-old British surgeon and one of 10 volunteer medical aid workers fatally shot in the remote mountains of northeast Afghanistan.

They pass tombstones of soldiers and civilians as they wander through the small graveyard set behind a tall concrete wall in a bustling part of Kabul. END_OF_DOCUMENT_TOKEN_TO_BE_REPLACED

The Taliban on Thursday rejected a United Nations report that blamed it and other insurgent groups for 76 percent of all civilian casualties in Afghanistan.

Photo Spotlight: Gum on the street

A woman in a burqa and gloves sells gum on the streets of Kabul.  Under Taliban rule women were not allowed to leave their homes without being escorted by a male relative and were required to wear a burqa which covered their bodies from head to toe. Though women have more freedom now than under Taliban rule, some still wear the burqa.

The human cost of the Afghan conflict is escalating, with killings and attacks on children by the Taliban and other insurgent groups soaring, the United Nations said in a report released Tuesday.

"Afghan children and women are increasingly bearing the brunt of this conflict," says Staffan de Mistura, special representative of the U.N. secretary-general.

"They are being killed and injured in their homes and communities in greater numbers than ever before." END_OF_DOCUMENT_TOKEN_TO_BE_REPLACED

The White House is "frustrated" by remarks from Afghan President Hamid Karzai, who on Sunday promised tribal leaders he would hold back a NATO military offensive in violence-plagued Kandahar province until he had their backing, a White House spokesman said Monday.

"We will not conduct the operations in Kandahar until you say we can," Karzai told about 1,000 tribal leaders at a shura, or conference, at the governor's compound in the southern province.

Read the full story or watch the video of the meeting