With parliamentary elections ahead on Saturday, many in Afghanistan are living in fear of Taliban threats. But there are some parts of the country where people — particularly young people — are showing signs of optimism. 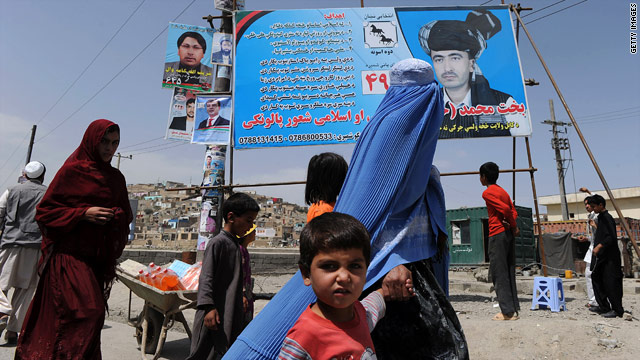 "Failure in Afghanistan is not an option," says Haroun Mir, an Afghan analyst and parliamentary candidate. "Certainly the United States can abandon Afghanistan. But the problem is, al Qaeda and the Taliban will not abandon their fight against the United States." END_OF_DOCUMENT_TOKEN_TO_BE_REPLACED

Where have Afghanistan's warriors gone?

Meetings with Bibi Aisha, then and now

Editor's note:  Bibi Aisha, the Afghan 19-year-old mutilated by her Talib husband, is now on her way to the United States for reconstructive surgery. CNN correspondent Atia Abawi writes about first meeting Aisha and what she's like today.

January 2010
Bibi Aisha didn't want to be interviewed and I couldn't blame her.

But her story was so remarkable – and so tragic – that I wasn't about to give up my efforts.

I had to make one more phone call.

Nineteen-year-old Aisha had survived persistent abuse a traumatic assault. Her husband — a member of the Taliban — sliced off her nose and ears after a Taliban court in Oruzgan ruled she had brought shame to the family by running away. (See the original story)

The court didn't care that she was tortured and abused by her father-in-law and 10 brothers-in-law on a daily basis. END_OF_DOCUMENT_TOKEN_TO_BE_REPLACED

NATO says there is no evidence of casualties beyond insurgents. END_OF_DOCUMENT_TOKEN_TO_BE_REPLACED

Mozhdah Jamalzadah is an Afghan superstar in a country still struggling with war and a battle between ideologies and cultures. END_OF_DOCUMENT_TOKEN_TO_BE_REPLACED

Can Petraeus succeed in Afghanistan?

'Everyone makes mistakes': Some Afghans on the fallout over McChrystal's comments

Washington may be up in arms over Gen. Stanley McChrystal's comments to Rolling Stone magazine about the U.S. mission in Afghanistan and how some of his colleagues are handling it — but some in Afghanistan are asking what the fuss is all about? END_OF_DOCUMENT_TOKEN_TO_BE_REPLACED

The World Cup from Afghanistan

Afghanistan does not have a World Cup soccer team of its own, but many countries in the coalition do. And they're preparing to cheer on their home countries in the tournament from Afghanistan, as CNN correspondent Atia Abawi reports. Meanwhile, some British troops in Afghanistan send out a special message to England's team. END_OF_DOCUMENT_TOKEN_TO_BE_REPLACED