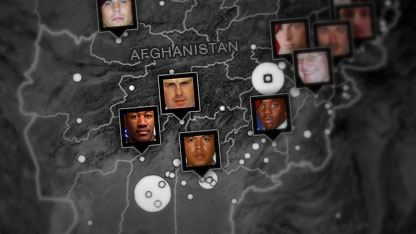 They are just three of the more than 2,400 U.S. and coalition troops who have died in Afghanistan since the war began almost 10 years ago.

This Memorial Day, explore CNN's Home and Away, sharing your messages or memories and discovering the individual stories of the fallen.

Home and Away: The fallen in Afghanistan

CNN has tracked the casualties since the wars began in Afghanistan and Iraq; a new feature to the site tracks service members' hometowns against a map of where they died in Afghanistan. The feature also highlights memories of the fallen by friends and families.

From all parts of the world and from every U.S. state, more than 1,700 U.S. and coalition troops have died in Afghanistan, according to a CNN count. As the U.S. observes Memorial Day on Monday, explore CNN.com's Home and Away, sharing your messages or memories and discovering the individual stories of the fallen.

Discover people like Ashton Lynn Marie Goodman from Indianapolis, Indiana. The senior airman died about a year ago when a roadside bomb exploded near Bagram Airfield. She was 21. END_OF_DOCUMENT_TOKEN_TO_BE_REPLACED

Losing hearts and minds in Marjah?

A U.S. Senate hearing on Thursday offered a grim assessment of the state of Marjah, almost three months after the major NATO offensive Operation Moshtarak began in the southern region.

Sen. John Kerry, chairman of the U.S. Senate Foreign Relations Committee, said Marjah does not appear to be a turning point in the overall mission in Afghanistan.

"A recent survey conducted by the International Council on Security and Development showed that a vast majority of villagers felt negatively about foreign troops and that more young Afghans had joined the Taliban over the last year," he said at the hearing. "Worse still were the reasons they had signed up with the Taliban: they said they joined because they had no jobs, because they had no money to get married or buy land, because they had no other future. In short, the coalition and their own government have not provided promising alternatives." END_OF_DOCUMENT_TOKEN_TO_BE_REPLACED

Amid helicopter gunships overhead, men danced and Afghan National Army troops marched during a Kabul ceremony on Wednesday to mark the 1992 toppling of the Soviet-backed regime.

The former Soviet Union, which once shared a border with Afghanistan, invaded Afghanistan and installed a puppet regime in the capital of Kabul in 1979. A long, weary guerilla war between various Afghan resistance groups and Soviet forces ensued. In 1992, the mujahedeen declared Afghanistan liberated. The Taliban gained control a few years later.

The Wednesday ceremonies, which spectators and government officials attended, also included a 21-gun salute and speeches. It was held at a sports stadium in the central part of the city, which was used as a public execution ground by the Taliban regime from the late 90s into 2001. END_OF_DOCUMENT_TOKEN_TO_BE_REPLACED

On Thursday, CNN.com's Brad Lendon wrote in Afghanistan Crossroads about a blog post that appeared on the International Security Assistance Force Afghanistan blog this week, announcing the military was cutting back on "non-essentials" for U.S. troops serving in Afghanistan. This included closing restaurants such as Burger King, Dairy Queen, Orange Julius and Pizza Hut on bases and dropping first-run movies from base theaters.

The reader response was fiery. END_OF_DOCUMENT_TOKEN_TO_BE_REPLACED

NATO troops in Afghanistan launched their biggest offensive of the war early Saturday Afghanistan-time (Friday ET), attacking what they call the last Taliban stronghold in Marjah, in the war-scarred southern province of Helmand.

Get up to speed with some of the highlights leading up to the offensive and the days after, below. END_OF_DOCUMENT_TOKEN_TO_BE_REPLACED

Who is Sirajuddin Haqqani?

Sirajuddin Haqqani, or Siraj Haqqani, is a senior Taliban commander and leader of the Haqqani network, which was founded by his father Jalaladin Haqqani. A long-time ally of al Qaeda, the group operates on both sides of the Afghanistan-Pakistan border and is well known to the U.S. military.

Haqqani has been a part of attacks against U.S. and coalition forces in Afghanistan. In news interviews, he has claimed planning the April 2008 assassination attempt on Afghan President Hamid Karzai and the 2008 attack on the Serena Hotel in Kabul that killed six people, including a U.S. citizen, according to the U.S. National Counterterrorism Center. Last year,  the U.S. State Department announced a $5 million reward for information leading to Haqqani.

In 2008, a U.S. missile strike on the Haqqani compound killed Haqqani family members including wives and children. In July 2009, an American soldier and three Afghan soldiers were captured by low-level militants and then quickly "sold" to Haqqani.

Haqqani was born around 1973. The elder Haqqani, Jalaladin, was among the mujahadeen fighters who received U.S. help to fight Soviet forces in Afghanistan in the 1980s.

On Tuesday, a new polio vaccine was used for the first time in Afghanistan, one of only four countries in which the disease still lingers. (Neighboring Pakistan, Nigeria and India are the others.)

Although it has been 50 years since the United States developed a vaccination for polio, millions of children remain unprotected. Polio is an infectious disease carried by the poliovirus. It causes motor paralysis and atrophy of skeletal muscles, often causing permanent disability and deformity.

Over the three-day immunization campaign, the World Health Organization said it hopes to immunize nearly 3 million children under age 5 in parts of Afghanistan, especially the southern regions. In some areas of the Kandahar and Helmand provinces, more than 60 percent of children have yet to be immunized, according to the WHO. Most of Afghanistan is polio-free, but 31 children have been paralyzed by the disease this year so far.

The new vaccine, given by oral drops, combines the protection from the two remaining types of polio into one dose.

Access to vaccines is one of the most basic, and biggest, problems in fighting the disease. And in some countries, distrust of the government and vaccines hinders vaccinating children against polio.