'Giving away' UK votes to Afghans

As more UK soldiers and dollars head into Afghanistan, it is a hot button foreign policy issue for the candidates in the UK election. But now some British citizens feel Afghans should have a say in British policy, giving away their votes to the Afghans as part of the group "Give Your Vote."  We followed one British voter and the person she's giving her vote to who lives in Kabul.

In Kandahar, some still see Taliban as lesser of evils

In Kandahar, where large-scale NATO military operations are expected this summer, some residents say the Taliban is their only option – the Afghan government and justice system are so corrupt they have nowhere else to turn to resolve complaints and get services. Even as they realize living under the thumb of the Taliban is miserable, some Kandahar residents say they would rather live under that than the misery of another military operation. And after previous experiences, they don't expect U.S. forces to stay the course.

Read some of the voices in Kandahar:

"When the Taliban are in our area, it is not easy to live under their conditions. People must know they are not helping us, instead they are disturbing us, it is not something good that we like," says Ghaffar. "They call on us to go to the mosque, and they tell us, don't travel on a certain road, because they have put IEDs there, and then claim 'We declared it to you; if you go you will be responsible for your own death.'" END_OF_DOCUMENT_TOKEN_TO_BE_REPLACED

Opinion: Why Taliban capture could be huge

The capture of the Afghan Taliban's operational commander, Mullah Abdul Ghani Baradar, in the Pakistani city of Karachi is a signature success for the United States' effort in Afghanistan and Pakistan, but it does not indicate that the insurgent movement will collapse.

In the short run, local Taliban commanders will be able to maintain the movement's operational effectiveness against U.S. and NATO troops. Over the long term, however, increased collaboration between American and Pakistani intelligence agencies could prove debilitating for the movement.

Read the full commentary from Brian Fishman, a counterterrorism research fellow at the New America Foundation, a think tank focused on innovative ideas across the political spectrum, and a research fellow with the Combating Terrorism Center (CTC) at West Point.

From the Afghan media

Take a look at some of the top stories and editorials in Afghan media related to Operation Moshtarak in Marjah. Excerpts are compiled from a U.N. Assistance Mission in Afghanistan report.

Weesa Daily (private media editorial): The United States and United Kingdom want to establish their military bases in Helmand, Nimroz, Herat and some other important places in Afghanistan so that they can have control of Helmand with its rich petroleum resources. They also want to control Guada Port in Pakistan and Bandar-e Abbas in Iran. (Guadar is a port that links Pakistan to China). The offensive launched in the name of Marjah is nothing but hiding their intensions about oil wells in Helmand and the strategic importance of the ports mentioned. Therefore, both the public as well as the authorities ought to pay attention to the sensitivity of the issue. END_OF_DOCUMENT_TOKEN_TO_BE_REPLACED

Editor's note: Michael O'Hanlon, senior fellow at the 21st Century Defense Initiative at Brookings, penned an opinion piece for CNN on the Pentagon's newly released strategy paper. Below he focuses on Afghanistan.

The Afghanistan mission is an important place to begin the discussion. This year and next, the United States will deploy up to 100,000 troops in that country for much if not most of the year. Not only does that translate into $100 billion a year in added defense costs, above and beyond those of simply maintaining the military, but it also requires a standing ground force of a given size in order to handle such burdens over time.

As Hassina Sherjan and I argue in a new book, "Toughing It Out in Afghanistan," we should know a lot later this year and certainly by 2011 about whether our basic strategy is working there, but it may not be until 2012 or 2013 when U.S. force levels return back to 50,000 or fewer. Not only that, but the United States still has 100,000 troops in Iraq and will perhaps still have 40,000 there at the end of 2010.

Read more on O'Hanion's take on the Pentagon's defense strategy

Editor’s Note: U.S. Army Cpt. Brandon Anderson is a Company Commander in 5/2 Stryker Brigade Combat Team, deployed to southern Afghanistan. A 2003 graduate of West Point, he is a combat veteran of Iraq and Afghanistan. The opinions expressed in this guest blog are the author’s, and do not reflect the official view of the U.S. Department of Defense.

[cnn-photo-caption image= http://i2.cdn.turner.com/cnn/2010/images/01/04/story.anderson.jpg caption="U.S. Army Cpt. Brandon Anderson on patrol in Afghanistan"] In February of 2008, I found myself riding in the back of an ANA ambulance with a wounded Afghan teenager. Shrapnel from a suicide bomber outside of Kandahar City had lodged itself in his neck. He was bleeding while trying to scream. I was holding him and trying to keep him calm, while the driver kept looking backwards toward me, as if to ask, “Is he going to die”? I could not answer that, because I did not know myself. What I did know was that a young man had been maimed, and I could not understand why.

Presently, the American people and Army, along with their allies in Europe, Asia and the Mideast are grappling with a hybrid of insurgency and terrorism. The al-Qaeda terrorists who have struck America, Britain, Spain, and other nations have embedded themselves within the Taliban insurgent network that spans Afghanistan and Pakistan. This is not a war that can be decided in the outcome of a single battle, or through the body counts and hilltops that are so germane to a conventional fight. Rather, the present conflict is focused on the people - their security, unity and support. Western armies are incredibly good at fighting and winning the pitched battles that their fathers and grandfathers fought and won in the Gulf War and World War II. Presently, al-Qaeda and those who protect them have neither the capability nor resources to compete with the West in tank-on-tank conventional wars. As a result, their approach has evolved. END_OF_DOCUMENT_TOKEN_TO_BE_REPLACED

Members of the U.S. military send out New Year greetings from Bagram Air Field to their family and friends, originally featured on AC360° with Anderson Cooper and Kathy Griffin.

[cnn-photo-caption image= http://i2.cdn.turner.com/cnn/2010/images/01/01/story2.ireport.newyears.jpg caption="Cpl. Cruz with the 'chemlight' New Year's ball"] Meanwhile, troops at Camp Leatherneck Marine base in Afghanistan celebrated the new year with a ball drop of their own.

They created their ball out of plywood and chemical glow sticks and then raised it up on a crane. Christopher Aragon submitted the iReport of the unique New Year celebrations; he's been in Afghanistan for two months. He said it took the group about four hours to make the ball. See more of the photos

Sources say that on Tuesday, President Obama will announce his decision on Afghanistan. Explore three different takes on the upcoming decision by:  Gen. Wesley Clark, former NATO Supreme Allied commander; Matthew Hoh, a former State Department official who resigned in protest over the U.S. policy in Afghanistan; and Tom Cotton of Vets for Freedom, an organization of combat veterans of the wars in Iraq and Afghanistan. They were guests on "Larry King Live." END_OF_DOCUMENT_TOKEN_TO_BE_REPLACED 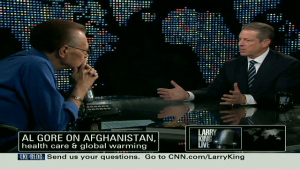 Former Vice President Al Gore discusses the war in Afghanistan and the Obama administration's stance on the war with CNN's Larry King.

Watch an excerpt from the Larry King interview 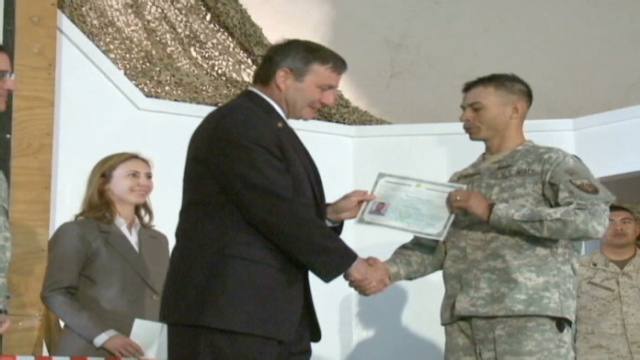