The home video from Marine Lance Cpl. John F. Farias held little back from his parents about the dangers of fighting in Afghanistan, about how the experience was changing him and about how much he missed his family.

"I'm starting to change a lot. I'm kind of forced to grow up here," Farias said in the first video he sent home to New Braunfels, Texas, since deploying in April to southern Afghanistan's volatile Helmand province.

They were among his final words for his family. Farias was one of two Marines killed during combat operations in the province Tuesday, the Department of Defense said. END_OF_DOCUMENT_TOKEN_TO_BE_REPLACED

Inside a firefight between U.S. troops, insurgents

MORE: Photos of the attack

U.S. troops use mortars first on Tuesday, aiming for Taliban dug into the hills. Machine guns rattle through the air. But the incoming fire on U.S. Combat Outpost Pirtle King is very accurate. Then, four massive airstrikes, as U.S. jets strafe the hills. The Taliban falls silent.

The next morning, it starts again - mortars and RPGs pound the base, and for the second time in 24 hours the base is under attack.

On Afghanistan's eastern border, Kunar Valley is vital strategically. If the Americans leave, militants from Pakistan will flow through the valley. If they stay, then every few days, attacks like those on Tuesday and Wednesday happen.

Related: In the deadly valley of Kunar

CNN's Tommy Evans grabbed these photos as a mortars and RPGs pound a the U.S. Combat Outpost Pirtle King in Afghanistan near the Pakistan border.

MORE: Watch video of the attack

In the deadly valley of Kunar

Kunar, Afghanistan — Kunar province, on Afghanistan's eastern border, is as alluring to outsiders as it is unwelcoming.

It's a key transit route for militants from Pakistan. But it's also been the scene of some of the fiercest fighting for U.S. troops in the 10-year war.

In a tiny outpost, Pirtle King, troops test mortars against an insurgency that is rarely seen but frequently attacks from all sides. END_OF_DOCUMENT_TOKEN_TO_BE_REPLACED

On Tuesday, an Obama administration official told CNN that Obama will announce that 30,000 U.S. "surge" forces will be fully withdrawn from Afghanistan by the end of 2012. Members of Congress are being informed that 10,000 troops will be withdrawn by the end of this year, followed by another 20,000 next year, a congressional source said.

Check out the U.S. troops levels over the years as well as the number of U.S. casualties

The mood among the troops at Bagram Air Base, the nerve center of American operations in Afghanistan, is one of cautious optimism. US soldiers acknowledge that the killing of Osama Bin Laden was a big achievement for America, but that their mission here is far from over.

Kabul, Afghanistan (CNN) - At least six American service members were killed Wednesday when a man opened fire on troops and a "gunfight" ensued at an airport in the Afghan capital, military officials said.

A NATO official backed off earlier reports that eight coalition service members and a contractor were killed, saying that the alliance could only confirm six International Security Assistance Force (ISAF) troops were killed. It did not disclose their nationalities.

The incident - which occurred at the Afghan national air force compound at North Kabul International Airport - stems from an argument between an Afghan pilot and an international colleague, officials said.

Clay Hunt served in both Afghanistan and Iraq, where he was wounded, shot through the left wrist on patrol near the wasp nest of battles, Falluja. Two weeks ago Hunt killed himself in his Sugar Land, Texas, apartment.

Marine Corps brothers, Texas friends and family, and schoolmates believe Hunt's suicide is a wake-up call for America. All ask why?

CNN's Paul Vercammen explores the story of Clay Hunt, who is described by one mourner as "an American badass with a heart of gold." 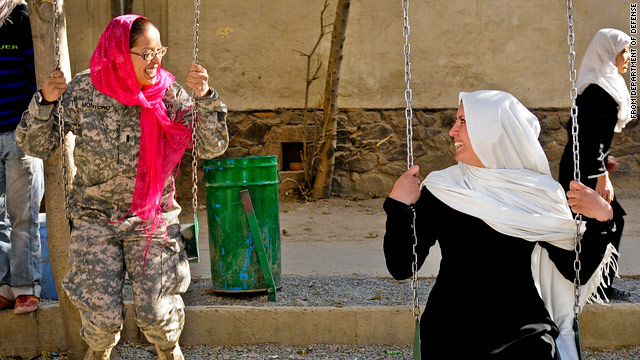 Army accused of covering up mistakes in Afghan battle

It will go down in history as one of the U.S. military's worst battles in Afghanistan. And according to the families of the soldiers who died there, the history written by the U.S. Army is biased and inaccurate.