The father of the Jordanian doctor accused of killing CIA officers talks with CNN's Nic Robertson, while the suspect's brother tells CNN that his sibling's actions were "out of character" and that the man was "under pressure."

The man's father said he was called by an Afghan speaking in broken Arabic from Afghanistan. The Afghan told him his son was dead and that he died as a hero in an operation to kill CIA agents.

Al Qaeda has claimed responsibility for the suicide bombing in Afghanistan, according to a statement posted on Islamist Web sites.

Mustafa Abu Yazid, al Qaeda's commander of operations in Afghanistan and its No. 3 man, said the attack avenged the death of Baitullah Mehsud, leader of the Taliban in Pakistan who was killed in a missile strike last August, and al Qaeda operatives Saleh al-Somali and Abdullah al-Libi.

In the wake of the suicide bombing last week, new security guidance has gone out to U.S. bases across Afghanistan, U.S. military officials said. 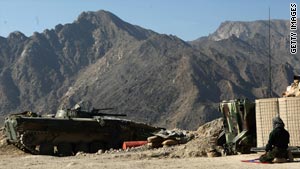 The bomber was a source who came to the base camp in Khost near the Pakistan border for a meeting on December 30, a senior U.S. official also confirmed.

The man had been used by both countries' intelligence services in the past, and had provided information about high-value targets, the senior U.S. official said.

U.S. enemies seem to be competing to garner credit for last week's suicide bombing that killed seven CIA officers in Afghanistan. The varying claims of responsibility from Taliban groups in Afghanistan and Pakistan may be both complementary and competitive as militants seek to spread the word and attract fresh donations and recruits, analysts said Sunday.

"It's a tremendous boost for any group out there that can claim killing CIA" officers, said Richard Barrett, coordinator of the United Nations Taliban and al Qaeda Monitoring Team.  Details about Wednesday's attack are murky.

The big question in CIA deaths

The CIA is vowing to retaliate for the deaths of seven of its workers in Afghanistan. Reports suggest the suicide bomber infiltrated the very nerve center for the CIA in Afghanistan. The attack happened at a desolate U.S. base in Khost province, not far from the border with Pakistan.

CNN's Atia Abawi in Afghanistan looks at the basic question: How did someone walk into this U.S. facility and blow himself up?

Abawi: That's a question that's not being answered by American officials here in Afghanistan at the moment. What we are hearing is from the Taliban. It comes from a statement. They are saying that they actually infiltrated the Afghan National Army, and that it was actually an Afghan soldier who was able to make it on that American base, able to make it into the gymnasium, where he detonated his suicide vest, killing the seven employees of the CIA. END_OF_DOCUMENT_TOKEN_TO_BE_REPLACED

Former CIA official Robert Richer called it "the greatest loss of life for the Central Intelligence Agency since the Beirut Embassy bombing" in 1983, which killed eight agents.  Flags at CIA headquarters in Langley, Virginia, flew at half-staff Thursday.

Around the Web: CIA suffers loss of 7 employees

A suicide bombing in Afghanistan Wednesday killed seven CIA employees and wounded six others. The Taliban has claimed responsibility for the suicide bombing.

"Those who fell yesterday were far from home and close to the enemy, doing the hard work that must be done to protect our country from terrorism," CIA Director Leon Panetta said Thursday in a written statement.

"We owe them our deepest gratitude, and we pledge to them and their families that we will never cease fighting for the cause to which they dedicated their lives - a safer America."

The statement added that “neither the names of those killed nor the details of their work” would be released because of the sensitivity of their mission.

A Wall Street Journal report called it “the largest single-day loss for the spy agency since the Beirut embassy bombing in 1983.”

Time magazine’s Bobby Ghosh writes that the casualties “will cast a pall over the agency.”

END_OF_DOCUMENT_TOKEN_TO_BE_REPLACED

Update 12/31/2009: The Taliban has claimed responsibility for a suicide bombing Wednesday that killed eight Americans believed to be CIA employees.  In a message posted on its Web site, the Taliban said an Afghan National Army soldier detonated his explosives-packed vest, killing 20 people and injuring 25 others. A spokesman for the International Security Assistance Force's (ISAF) Joint Command would not comment on the claim that a soldier was involved, saying the force was still gathering information. More details

Kabul, Afghanistan (CNN) - Eight Americans were killed in a suicide bombing Wednesday at a military base in eastern Afghanistan, according to a U.S. military official and a U.S. Embassy official.

A suicide bomber wearing an explosive vest attacked Forward Operating Base Chapman near the district of Khost in Khost province, said a third official, who asked not to be named. The military official said the eight people were not from the military.

There were conflicting reports as to whether the bomber walked into the dining facility or the gym at the base.