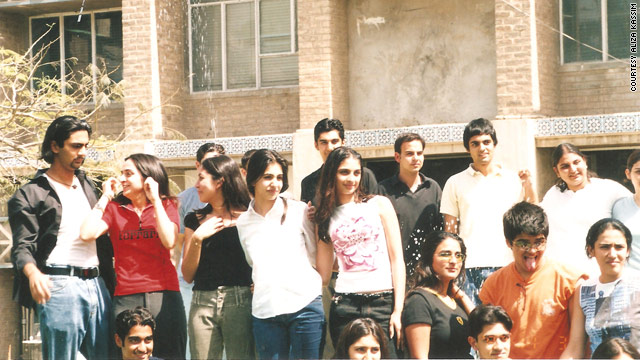 CNN's Aliza i. Kassim (center, wearing a t-shirt with pink flower), shown here with some fellow classmates in 2002, was attending the private Karachi American School when the 9/11 attacks took place.
May 19th, 2011
10:18 AM ET

It’s my war too

Editor's note: Aliza I. Kassim is an editor at CNN’s International Desk in Atlanta covering the Middle East and south Asia. Aliza is a graduate of Columbia University’s Graduate School of Journalism and has reported for various media organizations from Pakistan, Afghanistan and Tajikistan.

It is hard to believe that the name that became infamous and on the lips of every child and adult alike, from the depths of the East to the peaks of the West, finally met his demise on May 1, 2011.

Most everyone has a 9/11 story. We hear about office workers killed at the World Trade Center, firefighters who saved lives while sacrificing their own, and soldiers sent to battle the vague enemy dubbed terrorism. The stories’ overarching theme is that America had been targeted and attacked. We don’t hear, however, about how the attack resonated far outside U.S. borders.

In the same world region as bin Laden’s supposed Afghanistan hideouts, Karachi American School is a private, western-style secondary school in a tranquil part of Pakistan’s largest city. KAS educates about 350 students, most of whom are affiliated with the U.S. by way of citizenship, diplomacy, and parents. The school’s teachers are all American by origin. KAS students study A.P. courses, play basketball, participate in the chess club, and take dates to prom.

On September 11, 2001 I was a senior at KAS.
On September 12, 2001 – The day after the attack, my classmates and I arrived at school, but our teachers did not. Overnight, all of the school’s teachers had been placed in to a kind of protective custody. Most returned to the U.S. and some fled to the Far East. Our classes were now being taught online and for some Pakistani substitute teachers were found to fill the void. We took only basic courses. Without guidance counselors, faculty recommendations, and even a cohesive curriculum, we were significantly disadvantaged.

My application for college was sent in three parts: – Karachi (where I was), Thailand (where my guidance counselor was) and the US (where my teachers had been flown too).

In one day’s attack on the U.S., bin Laden killed thousands, strengthened American resentment against the Middle East, Central and South Asia, and consequently wrecked my college admissions prospects. Despite my location in Pakistan, bin Laden was my enemy as much as he was America’s enemy.

In the nearly ten years since the attack, I attended college, dedicated my career to journalism, worked in remote locations around the world, and received a graduate degree. Along the way, I met people who ignorantly judged me based on my appearance, and faced their inaccurate, often appalling comments about my home country. Over time, their questions about bin Laden faded, and I began talking about Bhutto, Musharraf and the United States’ new ally in the war on terror.

10 years later, I was sitting at work and when we received urgent alerts of President Obama coming on air to make a public announcement. Speculations came pouring in as the newsroom suddenly came to life, some said Gadhhafi is dead, others said we are launching a new war and then some, half mockingly, said Osama Bin Laden is dead.

I heard the announcement at 10.35p EDT, but I finally sunk in when I spoke to our correspondent in Kabul at 11:30p.
The conversation went like this:
“Hi Nick, it’s Aliza.”
“Osama is dead.”
“Osama Bin Laden is dead”
“No I am not joking he is really dead!”

It is now weeks after the world received news of Bin Laden’s capture and kill – details of the raid are still forthcoming and/or changing. I’ve heard a parade of American politicians hypothesizing that Pakistan had been unfaithful to the U.S., and that Pakistan had purposely held bin Laden. One called Pakistan unreliable and untrustworthy, and suggested that the U.S. ally with India against Pakistan.

These talking heads forget that Pakistanis in Pakistan – just like Americans in America – were severely affected by bin Laden’s attacks. They forget that countless Pakistani soldiers have died in furtherance of U.S. objectives in the region. These pundits must realize that Pakistani citizens are not to blame for the hypothetical actions of the Pakistani government. The pundits must realize that winning the war on terror does not mean causing collateral damage, but rather means defeating a force of ideas.

My heart goes out to those at my alma mater the Karachi American School – Although, nearly 10 years younger than me these students will be in a similar precarious situation as I was and I can only hope that they are not discriminated against due to the actions of the few in power.