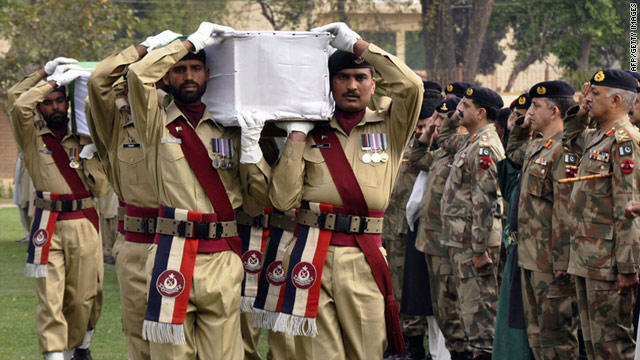 Pakistani soldiers carry coffins of their colleagues during a funeral ceremony in Peshawar on Tuesday, March 29.
March 29th, 2011
11:27 AM ET

Soldiers mistakenly kill themselves in Pakistan

Fourteen Pakistani soldiers were killed when they fired a mortar to try and repel a group of militants but accidentally hit themselves, a government official said.

The incident occurred when the soldiers were traveling in a convoy of three vehicles Monday night near the village of Akakhel in Khyber Agency, said Roshan Khan, a government official in the agency.

Miltants fired on the convoy with machine guns and a soldier responded by firing a mortar. Somehow the mortar landed among the soldiers, killing them, Khan said.

Khyber Agency, 24 kilometers (14 miles) west of Peshawar, is the capital of northwestern province of Khyber Pakhtunkhwa and is considered a hub for militants.

Khyber Agency also is one of the main supply routes for the U.S.-led coalition forces operating in Afghanistan and militants frequently attack NATO supply trucks in the region.

The militants took over the Waygal district in Nuristan province after a clash with police, said Mohammad Farooq, the security director of the province.

A Taliban spokesman, Zabiullah Mujahid, said the entire district was under Taliban control.