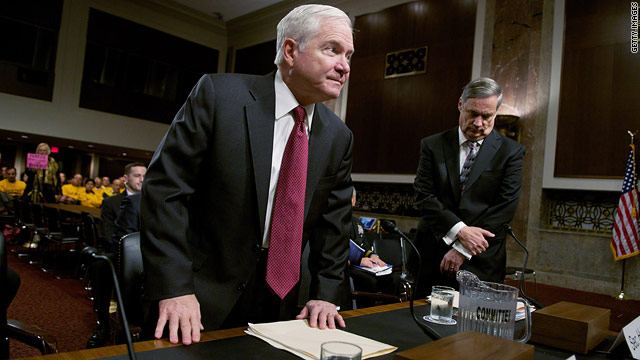 Defense Secretary Robert Gates and Under Secretary of Defense and Chief Financial Officer of the U.S. Department of Defense Robert F. Hale arrive to testify before a Senate Armed Services Committee.
February 18th, 2011
10:40 AM ET

Some U.S. senators are questioning whether the ambitious plans to increase the size of Afghanistan's security forces are coming at a cost that Afghanistan can never afford to underwrite.

Secretary of Defense Robert Gates says the size of Afghanistan forces - what he called "our ticket out of Afghanistan" - is under discussion inside the Obama administration.

"And the issue is under discussion in no small part because of the question of sustainability." Gates told the Senate Armed Services Committee Thursday. "How big an army can we afford? Because let's not kid ourselves, nobody else is contributing to this in any significant way."

Now, the United States pays more than $12 billion a year to build up and maintain Afghanistan security forces. Expansion and improvement of the security forces there is a key element of U.S. strategy and the planned withdrawal of U.S. forces by 2015.

Sen. Claire McCaskill, D-Missouri, said Afghanistan is not large enough to foot the bill. The annual cost for the security forces is almost half the total annual gross domestic product for Afghanistan.

"I think it's time that we be very, very honest with the American people that we are building a military for the Afghanistan nation," McCaskill told Gates. "Once we're gone I think we're going to be on the hook to help pay for this military for some time."

Gates agreed. "We can't sustain $12.8 billion a year for very long," Gates said, adding that the size of the Afghanistan military should be considered "a surge," with the chance to reduce it when the country reaches a political settlement and the Taliban is no longer a threat.

The administration is considering boosting the size of Afghanistan security forces by up 70,000 people, to 378,000. Both Joint Chiefs Chairman Adm. Mike Mullen and Gates predicted a decision on that increase soon.

Committee chairman Sen. Carl Levin, D-Michigan, urged Gates and Mullen, to help persuade U.S. allies to help pay the cost of the Afghanistan military. "There really needs to be sharing of that burden among our NATO allies," Levin said. "We cannot carry the $12 billion alone."