The explosions took place during a picnic hosted by the former police chief of Arghandab district in the province, said the province's district governor.

No one immediately claimed responsibility.

"The leadership of Ministry of Interior strongly condemns the insurgent's un-Islamic and inhumane action," the ministry said. "The police have launched an investigation in to the case." 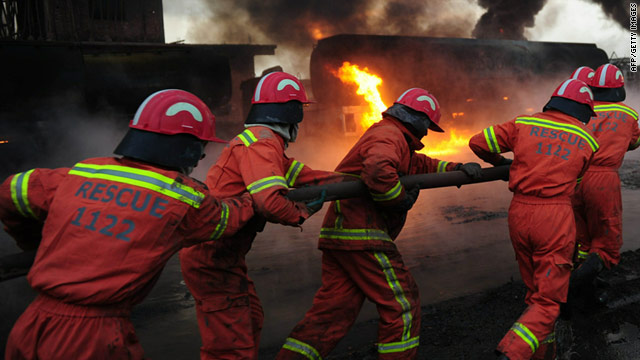 Gen. David Petraeus, the top U.S. commander in Afghanistan, is ordering an investigation into a scathing Rolling Stone magazine report that says the Army ordered soldiers trained in "psychological operations" to manipulate visiting lawmakers to secure more troops and funding for the war, the military said Thursday. END_OF_DOCUMENT_TOKEN_TO_BE_REPLACED

Two intelligence officials said the drone fired two missiles on the militant's hideout in the area of Data Khel in North Waziristan, one of the seven districts of Pakistan's volatile tribal region bordering Afghanistan.

The intelligence officials asked not be named because they were not authorized to speak to the media.

Based on a count by the CNN Islamabad bureau Thursday's suspected drone strike was the eleventh this year.

NATO's International Security Assistance Force is investigating the claims stemming from an operation Thursday morning in the Alah Say district of Kapisa province, the military said in a statement. Armed insurgents were the target, ISAF said.
END_OF_DOCUMENT_TOKEN_TO_BE_REPLACED

Afghanistan will need help from the United States after a planned withdrawal of U.S. troops in 2014, Afghanistan's defense minister said Wednesday.

Minister Abdul Rahim Wardak made the comment to Defense Secretary Robert Gates during a visit to the Pentagon in Washington.

Gates complimented Afghanistan for taking what he called an increasingly leading role in their security.

President Barack Obama has announced plans to begin withdrawing some troops from Afghanistan this July, with all U.S. combat troops scheduled to be out of Afghanistan by 2014.

The U.S. military is denying Afghan government accusations that Gen. David Petraeus, the commander of international forces in Afghanistan, callously dismissed concerns of an airstrike burning children in a northwest village.

The accusation, reported by the Washington Post, stemmed from a weekend meeting in Kabul between Afghan officials and the general to discuss an airstrike in Kunar province.