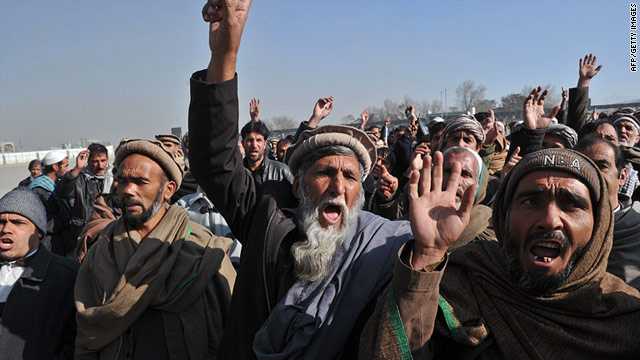 Humayoun Azizi, Karzai's minister for parliamentary affairs, said the president's decision came after the country's Supreme Court sent word that it would not intercede in the seating of parliament following a deal between Karzai and the parliament over prosecuting crimes arising from last year's elections.

Karzai had refused to swear in the new parliament until an electoral court he established in December can review complaints from losing candidates. He has refused two previous calls by lawmakers to dissolve that body, which members of the National Assembly says is unconstitutional.

The deal, floated by lawmakers on Sunday, says criminal cases stemming from the election will be prosecuted based on Afghanistan's constitution and election laws and that members of parliament would retain their immunity. It drops references to the "special court."

Last week, Karzai's office announced a one-month delay in inaugurating parliamentary members, saying that the special court on election fraud needed more time to investigate complaints from losing candidates. The decision drew criticism from the U.N. mission in Afghanistan and concern from analysts that it could spark ethnic divisions and more violence.

The decision resulted in losses for candidates from Karzai's power base in the largely Pashtun south, where much of the fighting between Taliban guerrillas and NATO and Afghan troops is taking place. The losing candidates argue that their constituents were unable to vote because of violence and intimidation, and that Pashtuns will feel increasingly alienated from the government and turn back to the Taliban.

"The most important thing that is being ignored in these legalistic discussions and political maneuvers is the people of this country. Where do they fit in? Where do they belong?" said Daud Sultanzai, one of about 250 losing candidates who were scheduled to meet Monday with Karzai.

That meeting was canceled, Sultanzai said. They are now expected to meet with the president on Tuesday, he said.

Sultanzai said that the decision to inaugurate parliament "will be very costly for Karzai and for the nation the legitimacy of parliament, in the hearts and minds of the people, is simply not there. The methods for coming to this parliament are not legitimate."

"This parliament will always lack legitimacy and that will create security problems by those who feel they are not adequately represented," he said.

In Sultanzai's home province of Ghazni, all 11 parliament seats went to the province's Hazara minority. In one district, only 3 people out of 100,000 cast their ballots. He blamed forces outside the country for pushing ordinary Afghans "into this corner."

Karzai, whose own 2009 re-election was marred by allegations of widespread fraud, had appeared to concede to lawmakers' demands on Saturday and offered to convene parliament on Wednesday. But under that offer, the inauguration would have taken place only if lawmakers accepted any decision made by the special court, lawmaker Baktash Siawash said Saturday.

Lawmakers countered Karzai by asking him to dissolve the special court and have the nation's Supreme Court investigate the cases. Karzai also rejected that proposal.

CNN's Arwa Damon and Mati Matiullah contributed to this report.