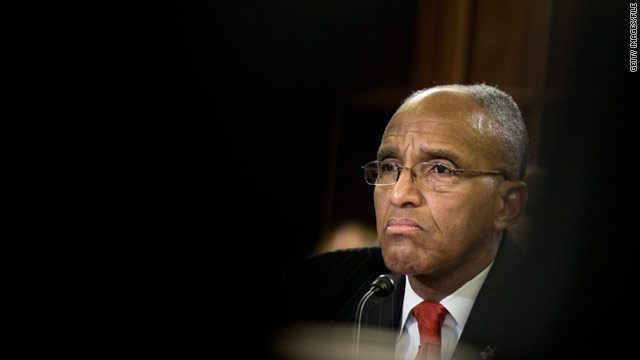 The White House issued a statement praising Fields for 40 years of public service.

"As he moves on to new challenges, he can do so confident in the knowledge that the President and the American people owe him a debt of gratitude for his courage, leadership, and selfless service to our nation.," the White House statement said.

Sen. Claire McCaskill, D-Missouri, Fields's sharpest critic, was quick to applaud the change and its potential impact on how the United States monitors spending in Afghanistan.

"With billions of dollars being spent in Afghanistan, our country must have top-notch leadership at the agency responsible for rooting out the waste and fraud that can jeopardize our efforts," McCaskill said.

McCaskill, who chairs a Senate subcommittee on wartime contracting, blistered Fields in recent hearings and repeated her criticism of him Monday when his departure was announced.

"Mr. Fields simply was not the right person for this very difficult job. I hope that his departure will allow the agency to turn over a new leaf and finally begin to do the important contracting oversight work we so desperately need," McCaskill said.

McCaskill herself had said she felt the hearings' questions about Fields's competence had been cruel and that she felt he had dug himself in, as the questions mounted about him and the troubled agency.

The U.S. government has spent $56 billion on major construction and public works projects in Afghanistan and is posed to spend an additional $16 billion.

McCaskill was joined by a bipartisan group of three Republican lawmakers - Sens. Tom Coburn of Oklahoma, Susan Collins of Maine and Charles Grassley of Iowa - who echoed her criticism of Fields and hopes for the future.

"With a surge in troops, civilians, and resources to Afghanistan, the need for eliminating waste, fraud and corruption from our reconstruction aid has never been greater. I look forward to the President swiftly naming a new Special Inspector General for Afghanistan Reconstruction," Coburn said.

McCaskill and other Senators repeatedly had contacted the White House and pleaded with President Barack Obama to make a change. Only the president can remove an inspector general from office.

At the recent McCaskill hearing, Fields told a compelling person story of how his poor upbringing in South Carolina prepared him to empathize with what he confronted in Afghanistan. "I came up hard... in poverty myself," Fields said. "I know what it is to live in poverty."