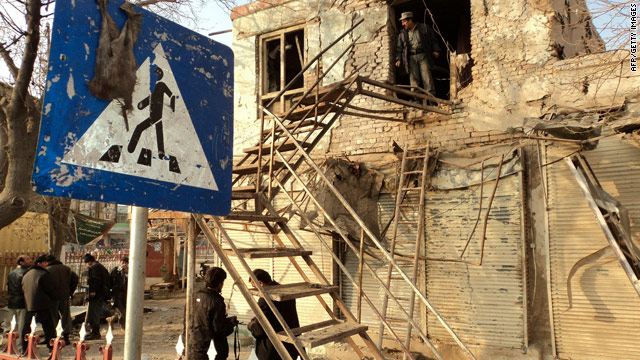 Hamdullah Danishi, acting governor of Kunduz province, confirmed the assault and said the attacker wanted to target a police checkpoint. The incident occurred in the city's Chowk area.

Kunduz, located in the north, has not been as violent as other provinces during the Afghan war, but lately it has been enduring more bloodshed.

In the Nangarhar province city of Jalalabad, in the east, a bomb killed one person and wounded 10 others on Thursday, according to the provincial governor's spokesman, Ahmadzia Abdulzai.

The explosive had been placed on a motorcycle and exploded 25 meters from the National Directorate of Security.

NATO's International Security Assistance Force on Thursday said a Taliban leader and two insurgents were killed Wednesday in "a precision air strike" in Ghazni province, in the southeast.

The dead Taliban leader, identified as Abdul Hai, was responsible for planning and implementing attacks against Afghan and coalition forces in the province, ISAF said.

He was involved with the double suicide attack on an Afghan National Army bus in Kabul on Sunday, according to ISAF.