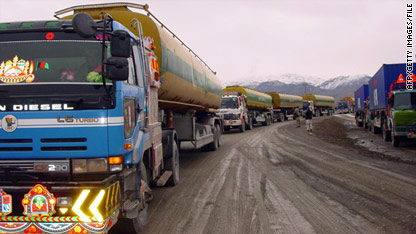 NATO trucks driven by Pakistani drivers prepare to cross into Afghanistan in 2009.

Two trucks caught fire, injuring the driver and his assistant in a truck, Khan said.

The incident took place in the Katha Kashta of Khyber Agency, one of the seven districts that make up Pakistan's tribal region bordering Afghanistan.

This is the latest strike on Afghan-bound supply convoys in Pakistan. The tankers are operated by contracted Pakistani firms hired by NATO, using Pakistani equipment and drivers.