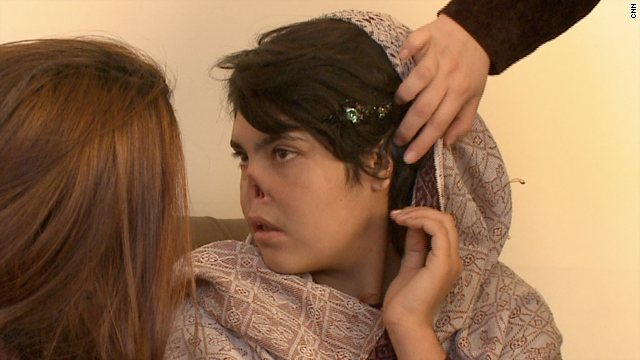 Police in southern Afghanistan have arrested the father-in-law of a woman whose nose and ears were chopped off after she was accused of bringing shame to her family.

Authorities in Oruzgan province said Haji Sulaiman, 45, was the one who held Bibi Aisha at gunpoint and ordered five others - including her husband - to cut her.

Juma Hemat, the Oruzgan police chief, said the arrest took place about two weeks ago and that Sulaiman confessed to the crime.

Read a behind-the-scenes with Aisha then and now

"The file of Sulaiman was completed by police and submitted to the attorney general's office in Oruzgan province," he said.

'Bibi' and 'Haji' are both honorifics - 'Bibi' meaning 'lady,' and 'Haji' a term of respect for someone who has performed the pilgrimage to Mecca that is required of all able-bodied Muslims.

"When they cut off my nose and ears, I passed out," Aisha said, describing the attack to CNN in March. "It felt like there was cold water in my nose. I opened my eyes, and I couldn't even see because of all the blood."

Aisha said her mutilation was an act of Taliban justice for the crime of shaming her husband's family.

At 16, she was handed over to her husband's father and 10 brothers, whom she claims were all members of the Taliban in Oruzgan.

"I spent two years with them and became a prisoner," she said.

She eventually ran away but was caught by police in Kandahar. And although running away is not a crime, in places throughout Afghanistan, it is treated as such if one is a woman.

Eventually her father-in-law found her and took her back to her abusive home.

She was taken to a Taliban court for dishonoring her husband's family.

The court ruled that her nose and ears must be cut off, an act carried out by the six men in the mountains of Oruzgan, where they left her to die.

She was brought to the United States where she received reconstructive surgery and a new life.