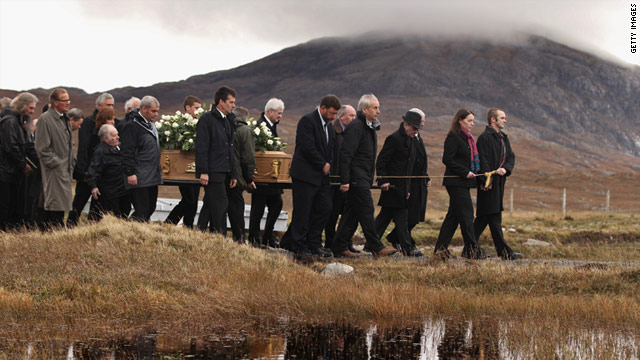 U.S. troops originally failed to admit that a grenade had been thrown during the rescue operation by American special forces, Hague said.

The failure was a breach of U.S. military law and troops have been disciplined for it, Hague told the House of Commons.

The U.S. Central Command, which oversees American military operations in Afghanistan, confirmed that Norgrove died "as a result of grenade wounds incurred during a U.S.-led rescue operation."

"Out of respect for the U.K.'s legal procedures, U.S. CentCom will not release additional information until Her Majesty's Coroner inquest is complete, anticipated sometime in early 2011," the statement from Central Command said.

The official British investigation is called a coroner's inquest. British authorities normally run such investigations for any British citizen who dies abroad.

The coroner will officially determine the cause of Norgrove's death, and Hague said his statement "must not prejudice" the inquest.

The grenade was thrown within the first minute after the rescue team landed by helicopter, Hague said.

"When the grenade was thrown no member of the team had seen or heard Linda Norgrove," he said.

Central Command spokesman Lt. Cmdr. William Speaks said non-judicial punishment was given to three U.S. service members for initially failing to disclose that a grenade had been thrown. The punishment is not for the action itself, Speaks said.

Hague reiterated that he had personally authorized the rescue mission, thinking it was the best chance of bringing her home safely.

Norgrove was kidnapped September 26 and was killed October 8. She was 36.

Her parents said Thursday they were grateful to have been briefed by the British and American officers who led the inquiry, adding that they would make a further statement next week.

A 10-man investigative team led by an American general and a British brigadier worked for two and a half weeks to determine the cause of Norgrove's death, Hague said.

Approximately 1,000 American and Afghan troops were dedicated solely to finding and rescuing Norgove in the wake of her kidnapping, Hague said, calling her death "a terrible tragedy."

Norgrove worked for DAI, an agency that provides various services to developing nations.

She spent much of her career managing projects for farmers and rural workers.