Many of the women we came across while traveling the country defied these labels.

Numerous women in Afghanistan still wear the burqa. Everywhere on the streets of Kabul, the country’s capital and most cosmopolitan city, you see powder blue cloth covering the women who wear it from head to toe. A small net screen, impenetrable from outsiders’ eyes, is their only window to the world.

One of the most enduring images was of a woman selling gum who knocked insistently on the window of our car as we drove slowly through Kabul’s traffic jams. Every inch of her was covered; she even wore black gloves in the sweltering heat. Not able to see her eyes, you could only imagine her life of obvious poverty. Yet there she was, on the street, trying to earn whatever money she could to support herself and her family. Her face was invisible. Her spirit was not.

More: Building a better future one paycheck at a time

Women say they feel protected by the burqa from the prying eyes of men. And yet it is women who must adapt themselves most radically to societal demands.

But even as they adapt, many Afghan women are finding ways to combat the narrative that Afghanistan’s long, sad past has shackled them with.

Lida Ahmady was trained as an elementary school teacher and her husband is fine with her working at that job. In school rooms, she aid, she would be surrounded by children and other women.

She wants to be a journalist, but has met fierce resistance from her husband and her family. Working as a radio reporter, she might encounter men, and in Afghanistan’s conservative, tribal-based society, it is forbidden for women to be with men unless they are accompanied by a male relative.

But her family’s reservations are not stopping her. Lida has convinced her husband to give her a chance. Studying journalism in Herat, in western Afghanistan, she is determined to make her mark as a journalist traveling throughout the country, writing stories about the problems women face.

One day, she told us, everyone in Afghanistan will know her name. 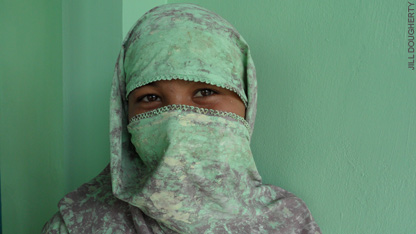 Her scarf covered in green paint, Shakila is only 18, working on a U.S-funded program teaching women how to paint and plaster at a women's health center in Jalalabad. The women earn money but also get training for future employment. Her father is disabled and she must support the family. She dreams of becoming a doctor.

In Jalalabad, we met women who were learning how to paint, plaster and do carpentry and electrical jobs — typically considered men's work — as part of a U.S.-funded cash-for-work program. Yet these women, their burqas covered in green paint, were working as hard as any man. One of the women has even started her own side painting business and is teaching her 14-year-old daughter the trade. It is amazing when women are given an opportunity; they grab it with both hands.

We saw the pride in young women's eyes as they gathered eagerly around a laboratory table to practice delivering a breech baby, part of a midwifery program in Herat. When they finish training in this U.S.-funded program, they will return to their villages as respected, educated women, helping to alleviate Afghanistan’s sky-high rate of infant and maternal mortality, but also having an impact on the role of women in their communities.

It felt positive — but tenuous. After emerging from years under the harsh rule of the Taliban who destroyed women’s schools, beat women for not wearing burqas and deprived women of any possibilities of employment outside the home, some Afghan women are fearful it could happen again.

If the Taliban are integrated into the Afghan government in the process of “reconciliation,” what will it cost women, they ask? Will peace come at the price of women’s freedom, even the limited freedom they now have?