The 467th was inside the building at Ft. Hood, Texas, on November 5, 2009, when a gunman opened fire, methodically killing 13 people and injuring dozens more. Soon after, they shipped to the warzone. 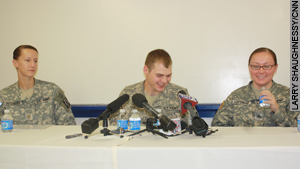 Maj. Laura Suttinger, Staff Sgt. Dick Hurtig and Sgt. Karam Kortenkam of the 467th Combat Stress Control Detachment speak to reporters after their return from a nearly year-long tour of duty in Afghanistan.

The unit is made up of about 43 officers and enlisted soldiers, trained in psychiatry, psychology, social work and therapy. Their mission was to provide stress control treatment and preventive care to troops in Afghanistan.

The rest of the unit was offered the chance, in consideration of the horrors they'd witnessed at Ft. Hood, to skip their long-planned deployment. None of them did. Their mission seemed to become more important after Ft. Hood. Almost one year to the day since the shootings at Fort Hood, the unit has returned home.

"There was a certain energy thought that helped drive us forward through that awkwardness and helped us get over that hurdle," said Maj. Laura Suttinger, commander of the 467th.

Staff Sgt. Dick Hurtig said their mission - to help soldiers deal with combat stress in the war zone - helped them go from the worst mass killing ever on a military base to the front lines of the longest war in American history. 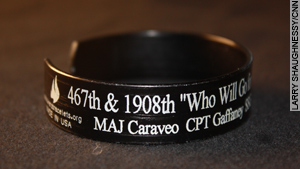 Maj. Laura Suttinger wore this bracelet with her killed colleagues' names during her time in Afghanistan.

"It was all the first time that those types of clinics had been set up in theater and in those locations. So, we were so focused on that, and everything was moving so fast, so I'm not sure if (the shootings) had a huge impact on the mission."

Relievers of stress, these soldiers went to war with their own stress of that terrible day.

Some of their "clients," as they referred to the soldier's they helped, knew what the unit had been through. "If a solider came in, and they knew what we had done or what we had been through, then I addressed that on an individual basis, but I made it a point to never bring it up in their counseling sessions and tell them my own struggles or my own problems," said Hurtig. "I felt like it would be unfair to them to steal the attention away from what they were doing, their mission, and the trouble they were going through, which is the reason they came in to see me to begin with."

That's not to say they didn't face their own agony as they were helping their clients.

"I was lucky, I had another member of my team who had been with the unit throughout the entire process who I knew well, and we leaned on each other and I guess I really depended on others in my unit, when I needed them," said Sgt. Kara Kortenkamp, a member of the 467th. "I knew what the resources were if I needed them."

Suttinger said some of her soldiers were mad, but that wasn't the primary reaction.

"I'm certain there's some anger there but I think that it goes back and forth and that's not the overwhelming reaction," Suttinger said. "If there is some anger there, it's more overcome with the other traditional grief reactions like the shock, like the denial and like the eventual overcoming."

Suttinger still wears a bracelet with the names of the colleagues she lost that day at Ft. Hood.

"There was a real sense of loss in that the people that we had trained with weren't going to be a part of the mission," Suttinger said. "It did feel a little fragmented even though we were all confident that we wanted to move forward."

The surviving members of the 467th have been invited to attend Friday's ceremony at Ft. Hood commemorating the 1-year anniversary of the massacre.

Hurtig has chosen to spend the anniversary in Wisconsin. "I've been away from my family for over a year now, I think it's best for me to be back with them, and I'll remember the event on my own but at least then, I'm spending the time with someone I've missed for a year."

Kortenkamp told CNN she intends to be there. "To honor the family that I lost. It's just the right thing for me to do to memorialize them, to remember that day."

They'll also remember Maj. Nidal Hasan, an Army psychiatrist who was not part of the 467th, but was scheduled to deploy to Afghanistan with the unit.

Hasan is accused of 13 counts of murder in connection with the shooting. He's the only person charged in the massacre.