Before a suicide attack on a CIA base in Khost, Afghanistan, last December, some people within the CIA and the Jordanian intelligence service were skeptical about the reliability of a Jordanian informant, but those concerns were not passed onto officers on the base where Humam Abu-Mulai al-Bulawi blew himself up, taking seven CIA employees and three others with him.

These findings are part of a just-completed CIA review.

For the first time since the start of the war, an Iranian representative joined international talks on Afghanistan.

A U.S. soldier is in custody Tuesday as the United States launches an investigation into the death of a Taliban detainee who was found dead over the weekend in his holding cell in Afghanistan of an apparent gunshot wound, officials said.

The detainee was being held at an Afghan government facility in Kandahar province, according to a news release from United States Forces Afghanistan.

The man - described as a senior leader of the Taliban in Arghandab District - was captured Saturday and was being held temporarily at that facility while awaiting transfer to formal coalition custody, the military said.

"The U.S. takes very seriously any mistreatment of detainees," said Rear Admiral Greg Smith, director of communication for U.S. Forces Afghanistan. "Our forces are trained to uphold the rights of persons in custody and any violation of those rights are fully investigated."

The U.S. Army Criminal Investigation Division has launched an investigation regarding the detainee's death, the military said.

Working instead of school, the boy mechanics of Kabul

The grease-covered orange overalls can't hide 14-year-old Nazer Ahmad's frail frame. As he leans under the hood of a wrecked car, torn plastic sandals on his feet, I know I cannot possibly understand the life this young boy is forced to lead in war-torn Afghanistan -
where jobs are few, pay is appalling, and young children must work rather than
go to school and play with their friends.
END_OF_DOCUMENT_TOKEN_TO_BE_REPLACED

Opinion: Restoring the tribal balance the only path to peace

Editor's note: Khalil Nouri is the co-founder of New World Strategies Coalition Inc., a native Afghan think tank for political, economic and cultural solutions for Afghanistan. Michael Hughes is a journalist and blogger for The Huffington Post and Examiner.com. He is also a strategist for the New World Strategies Coalition.  The statements and opinions expressed in this guest blog are solely those of the authors.

By Khalil Nouri and Michael Hughes, Special to CNN

President Barack Obama doesn’t have a viable Afghanistan exit strategy due to a fatal flaw in America’s policy development process: a complete lack of input from native Afghans. It is time for the U.S.-led coalition to realize there is only one solution for peace in Afghanistan – and that is an Afghan solution.

The alternatives bandied about to date are formulas for state collapse – a nearly 10-year-old failed counterinsurgency effort; a power-sharing arrangement that would divvy up Afghanistan between corrupt government officials, Islamic fundamentalists and mujahideen warlords; and a partition strategy guaranteed to yield perpetual civil war.

However, as paradoxical as this might seem, the U.S. cannot withdraw until an indigenous political solution is in place, because abandoning the field to the Taliban would create dire consequences that make the present military occupation look good by comparison. END_OF_DOCUMENT_TOKEN_TO_BE_REPLACED 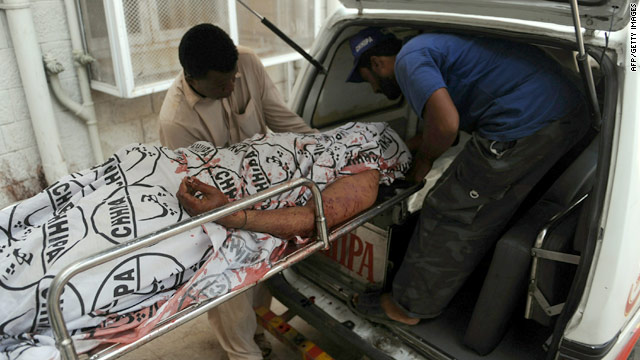 In Pakistan, 21 dead in Karachi violence

At least 21 people died when gunmen on motorbikes opened fire
in a Karachi marketplace on Tuesday, police in Pakistan said.

Others were injured in the attack, said Rafiq Gul, a senior police
official of Karachi. Violence since Saturday in Karachi has left dozens dead.
END_OF_DOCUMENT_TOKEN_TO_BE_REPLACED

The incident occurred in the area of Dasht Bado, a town in the district of Kalat of Pakistan's southwestern province of Balochistan, which borders Afghanistan.

It is the latest example of strikes against Afghan-bound shippers carrying supplies to help fight the Taliban.

Shair Ali, a police official of Kalat district of Balochistan province, said the gunmen stopped the vehicles, forced the drivers and their aides to run away, and threw petrol bombs at the vehicles, which caught fire and were damaged.

The containers were going to Afghanistan from Karachi through the Chaman border crossing.

The coalition force assaults Sunday in Baghlan province killed Abdul Jamil, who is the Taliban leader for two districts in the area, ISAF said.

Another leader in the area also was killed, ISAF said.

"The strikes killed 15 insurgents armed with rocket-propelled grenades and automatic weapons. ISAF was able to confirm today that Abdul Jamil and Juma Din, the Baghlan-e Markazi district leader, were among those killed."

In southern Afghanistan, three coalition service members were killed in attacks on Tuesday, ISAF said. And in the south's Kandahar province, more than 10 insurgents died in fighting on Monday, the NATO-led command said.