The website said a fighter named Abu Askar al-Almani and three other Jihadists had been "martyred" by the missile strike against a base in Waziristan, where German and Tajik fighters were living. German officials say al-Almani is the nom de guerre of Shahab Dashti, an Iranian-German who left Hamburg, Germany, with 10 other suspected militants in the spring of 2009.

Earlier this week, Pakistani officials told CNN that a drone strike Monday near Mir Ali in North Waziristan killed five German militants. They were alleged to be part of an Al Qaeda plot to target European cities with attacks styled after the one on Mumbai, India, in 2008. 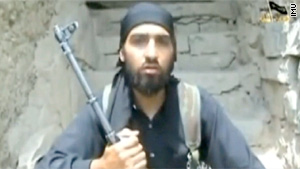 Officials say Shahab Dashti, known as Abu Askar al-Almani, is an Iranian-German who left Hamburg in 2009.

The alleged conspiracy prompted the U.S. State Department to issue a travel advisory Sunday to Americans traveling in Europe.

The jihadist website described al-Almani as "one of the colorful faces of the German mujahedeen" and included video in which he was holding a long-bladed knife.

The images of al-Almani first appeared in October 2009 in a German-language recruitment video released by the Islamic Movement of Uzbekistan, which has close links to al Qaeda. Dashti joined the movement after
arriving in Pakistan, German intelligence officials tell CNN.

Intelligence experts with the Combating Terrorism Center at the U.S. Military Academy told CNN that the website has in the past carried messages from the Islamic Movement of Uzbekistan.

A European counterterrorism official said that Western intelligence agencies are working to verify the website's information, but are treating it as serious and credible.

One member of the Hamburg group - Ahmed Sidiqi, a German Afghan, was detained in Kabul in July and is said to have revealed details about the al Qaeda plot against Europe while under interrogation at the U.S. airbase at Bagram, Afghanistan.

ccording to a European counterterrorism official, Sidiqi claimed that Dashti would return to Europe as a "foot soldier" in the attack, and that two other members of the group - Naamen Meziche and Asadullah M. - had planning roles in the plot.

Their whereabouts are unknown, but German officials believe they are still in the Pakistan-Afghan border region. Meziche, a French citizen of Algerian descent, was the chief recruiter of the Hamburg group, according to the official.

ast weekend, Dashti's family in Hamburg told CNN they were extremely concerned about their son's safety. The family said they believed their son had been brainwashed by extremists at Hamburg's Taiba mosque. German authorities shut down that mosque in August, alleging it had growing ties to extremist activity.

The mosque was once attended regularly by Mohammed Atta, the lead hijacker in the 9/11 attacks. All the members of the Hamburg group had attended the mosque, according to German intelligence officials.