After completing a seven day mission, a bomb-hunting patrol rolls into Kandahar air base in a cloud of billowing dust.

Among the road-weary American troops peeling off body armor and sweaty helmets is a 21-year-old soldier from New Jersey named Alan Carroll.

He hops out of the turret of an armored vehicle carrying a heavy 50-caliber machine gun, and then begins loading flak jackets and rucksacks into the back of an open truck.

The young man moves with speed, strength and enthusiasm, something you wouldn’t expect from someone who survived four bullet wounds in a single day less than a year ago.

“I’m trying this year not to go to hospitals,” Spc. Carroll says, while cleaning his guns back at his tent later in the day.

Carroll wasn't wounded on the battlefields of Afghanistan. He survived the November 5 shooting rampage at the U.S. military base in Fort Hood, Texas.

A lone gunman opened fire in a processing center, where troops were getting medical clearance before deploying to Afghanistan and Iraq. 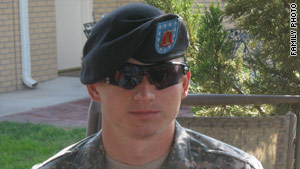 “At first I really thought it was a joke,” Carroll recalls. “Then I got hit here,” he says, pointing at his left arm, “and I was like, 'Holy crap! What the hell was that?' I still couldn’t believe it was actual live rounds.”

The room filled with smoke. Carroll says he tried to carry Pfc. Aaron Nemelka, a friend and fellow soldier who had been shot in the neck, out to safety.

“That’s when he shot me in the back,” Carroll says. “I was holding my back and trying not to scream and playing dead at the same time.”

Several agonizing moments later, Carroll made another attempt to carry his friend out of the blood-soaked room. That is when he came face-to-face with the suspected shooter, U.S. Army Maj. Nidal Hassan.

“Me and him just looked at each other,” Carroll says. “And the only thing I could think is ... ‘Dammit, I’m dead,’” Carroll says. “And he fired off two shots, and I heard one go past my ear and the other one hit me in the leg. Dropped me back down on the floor.”

When the smoke finally cleared, 13 people were dead, including Nemelka and two other soldiers from Carroll’s company. Carroll was one of at least 20 who were wounded.

Later, as he recovered in the hospital, friends and family say Carroll’s first priority was Afghanistan.

“His first question was, ‘Is this going to stop me from deployment?’” says Sgt. 1st Class Gerald “Woody” Wilson, one of the commanders of Carroll’s platoon.

Three months later, Carroll arrived in Afghanistan along with the rest of his unit with a clean bill of health.

“He did physical therapy,” Wilson says. “He was worried about staying behind.”

Carroll’s mother, Teresa Scholte, describes her son growing up as an “adrenaline junkie” with a “bull-headed” determination to succeed.

“When he was in school he was short and very thin,” says Scholte, who works as a receptionist in New Jersey. “That is what led him to take on this personality of ‘nobody’s going to mess with me and tell me what to do.’”

Today, the 20th Engineering Battalion operates in southern Afghanistan hunting for roadside bombs, the deadliest threat to U.S. troops in this country.

According to the commander’s statistics, since February 2, the battalion has had a 66 percent success rate in clearing the bombs. Slow-moving convoys of heavily armored vehicles have successfully discovered and defused 209 improvised explosive devices, but they have also been hit by no less then 129 roadside bombs. In eight months, 13 combat engineers have been killed by Taliban ambushes and explosive booby traps. 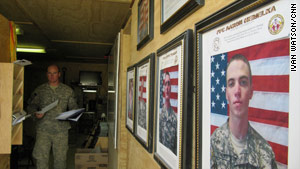 Photos of three soldiers killed in the November 5, 2009, Fort Hood shooting decorate the entrance of their company headquarters in Kandahar, Afghanistan.

Route clearance is dangerous work. And for the first six months of the tour, Carroll has been at the very front driving a Husky: the one-man, bomb-sniffing armored vehicle that one sergeant nick-named “the Coffin.”

“It’s the worst job,” Wilson says. “One, you’re by yourself. Two, you’re in the lead. And three, you’re usually the one who gets hit first. You’ve gotta be brave to drive the Husky.”

All but one of the vehicles in Wilson’s platoon have struck IEDs, including Carroll’s Husky.

“I had one hit underneath my truck. But it really wasn't that significant. Still scared the crap outta me,” Carroll says. He emerged from the explosion unscathed.

But last August, tragedy struck Carroll’s platoon when an insurgent fired a single round from a recoilless rifle at the turret of Wilson’s vehicle.

The attack killed the gunner, Spc Alexis Maldenado. Today, members of Maldenado’s company wear an engraved bracelet with their slain comrade’s name on it.

“It was probably the worst day of my life, the day he passed away,” Carroll says.

Meanwhile, the memory of the Fort Hood shooting is never far away. The portraits of three soldiers killed at Fort Hood hang in the entrance of Carroll’s company headquarters.

Soldiers from the 20th Engineering Battalion have received hours of counseling and therapy since the Fort Hood shooting. Their officers say they keep a close eye on the troops in the wake of more recent casualties.

But the true test of the combat engineers' emotional and mental health will come after their tour is finished, warns Lt. David Judson, one of the officers in the company. That's when they'll be back in the United States without the support of their fellow comrades-in-arms.

Like many of his fellow soldiers, Carroll was in 7th grade on the day the planes struck the World Trade Center. Nine years ago, he says he was waiting for the school bus when he learned about the September 11 terror attacks.

A lot has changed since then. Carroll is still relatively short, carrying weapons that sometimes seem almost as tall as he is. But he also has the bulging muscles of a man who spends long hours in the gym. And he has the enduring respect of his colleagues and superiors, some of whom have nicknamed him “National Treasure.”

Teresa Scholte, however, is worried about her son’s long term recovery from the Fort Hood shootings.

“That is weighing on me more then him being over there in Afghanistan,” she said in a telephone interview with CNN. “I feel like he’s more protected in Afghanistan because of the armor he has.”

“The only time it gets to me is when I’m alone and it's dark outside,” says Carroll.

“I get nightmares,” he adds. “But I’m used to it by now … I wake up, look around, see all my friends here and say ‘Nevermind, it's not real, go back to sleep.'”

After their seven-day mission, Carroll and two other soldiers laugh and joke about girls, as they scarf down pizza, much like other American men in their early twenties.

But the trio is navigating the sprawling military city at Kandahar Air Field, dressed in combat fatigues, with machine guns slung over their shoulders.

Barely old enough to drink alcohol legally, these young soldiers are already veterans of battles both at home and abroad.

They have the physical and mental scars to prove it.