White House mulls: Just how much Afghan corruption is too much?

Obama Administration sources say the U.S. is undergoing a gut-check about how to approach the Afghan corruption issue. While everyone acknowledges corruption is an important problem that must be addressed, there is concern in the administration that the near-myopic focus on corruption over the last several months is detracting from the bigger picture.

Recent discussions, including a White House meeting on Afghanistan this week, have centered around the most productive way to approach the corruption issue, according to the source.  Central to the conversation was how corruption plays into U.S. goals in Afghanistan and what can the U.S. realistically expect in terms of combating corruption. END_OF_DOCUMENT_TOKEN_TO_BE_REPLACED

Afghan protester shot at military base

An international forces service member shot a protester who aimed his AK-47 toward a guard tower at a NATO military base in southern Afghanistan, military officials said Thursday.

The man was pulled away by fellow demonstrators before members of the International Security Assistance Force (ISAF) were able to determine his condition. END_OF_DOCUMENT_TOKEN_TO_BE_REPLACED

For the second time in less than a month, security forces hunting for Taliban commanders found one hiding inside an oven, officials said Thursday.

In the latest incident Tuesday, a sub-commander allegedly responsible for attacks in three districts was found hiding in a floor oven of a compound when Afghan and coalition forces raided the location in Logar province in eastern Afghanistan. END_OF_DOCUMENT_TOKEN_TO_BE_REPLACED 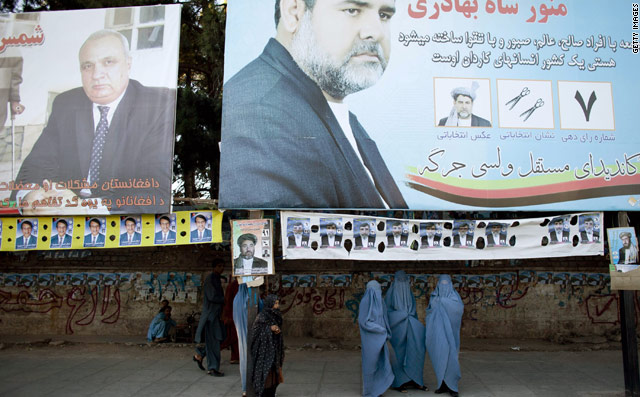 What you need to know about the Afghan elections

Afghanistan will hold parliamentary elections Saturday for only the second time since the Taliban were ousted from power. At stake are all 249 seats in the Wolesi Jirga. Who's running for office, how does the process work and what does it mean for the U.S. and other coalition forces there? Here's what you need to know: END_OF_DOCUMENT_TOKEN_TO_BE_REPLACED