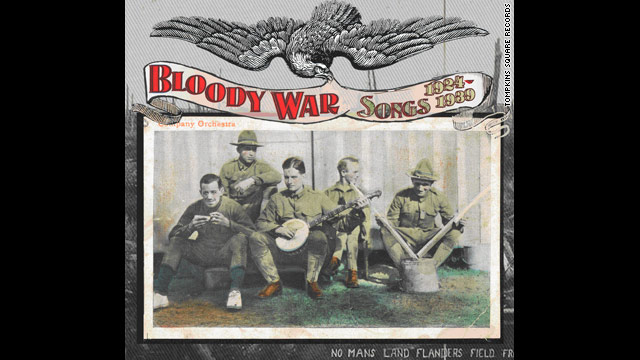 It was a chance, King says, to expose folk and country music buffs and others to war songs from Civil War, the Spanish-American War, and World War I, which differed greatly from most modern tunes about bloody conflicts.

“This material is not like the material that one would expect to hear like in the anti-war songs from the 60’s,” he said this week by phone. “When one thinks songs about songs one automatically thinks about protest songs. When in actuality these run the whole gamut of being songs, that don’t necessarily glorify war, but show its true impact on people.”

King and co-producer Josh Rosenthal of Tompkins Square Records hope to have a two-fold impact with the CD, bring unfamiliar music to the fore and using some of the profits from sales to help those who have served in recent conflicts. A portion of the proceeds will go to a foundation, Iraq and Afghanistan Veterans of America.

“Our notions of freedom and our ability to create this kind of material is due almost exclusively to the sacrifice of others,” he said. “We felt this was one of the best ways to give back to those who have done so much.”

Rosenthal called the project very personal. Even though his doesn’t have a direct connection to either war, he does have several family members who fought in combat for this country. It helped instill in him a desire to do something.

“I run a record company so I was like what kind of things can I do in a small way to be involved,” he said. “I thought it would be nice to pull in the IAVA, which is an organization that does not take a position on war. Their main function is to help people returning from combat.”

The CD, which contains 15 tracks, was an outgrowth from a previous project the two producers worked on in 2007. That three-disc compilation, entitled “People Take Warning,” almost included war songs. They waited instead, but this still feels like a fourth CD to that set, Rosenthal said.

Both producers said the first track on the album, “Just As The Sun Went Down,” recorded in 1936 by Zeke Morris, is their favorite and timeless.

“It essentially sings about how people on both sides of the line – in this case it was a song about the American Civil War – they have to leave people behind and those people end up broken-hearted with their loss,” King said. “There’s no human conflict that’s not like that.”

The album received a nice review from Bill Friskics-Warren, who wrote in The Washington Post:

But as "Bloody War," … poignantly attests, there was a time in this nation's history when songwriters engaged their subject in terms more personal than polemic - a time when singers were less concerned with ideology than with the human costs of war, especially among their working-class families and neighbors, many of whom paid the price.