Meetings with Bibi Aisha, then and now

Editor's note:  Bibi Aisha, the Afghan 19-year-old mutilated by her Talib husband, is now on her way to the United States for reconstructive surgery. CNN correspondent Atia Abawi writes about first meeting Aisha and what she's like today.

January 2010
Bibi Aisha didn't want to be interviewed and I couldn't blame her.

But her story was so remarkable – and so tragic – that I wasn't about to give up my efforts.

I had to make one more phone call.

Nineteen-year-old Aisha had survived persistent abuse a traumatic assault. Her husband — a member of the Taliban — sliced off her nose and ears after a Taliban court in Oruzgan ruled she had brought shame to the family by running away. (See the original story)

The court didn't care that she was tortured and abused by her father-in-law and 10 brothers-in-law on a daily basis.

A couple of days after my request I received a call from Manizha Naderi, the director of the NGO Women for Afghan Women (WAW).

"Aisha wants you to interview her," Manizha told me over the phone.

"Really? She changed her mind? Why?" I asked.

"I don't know, but she wants to talk to you." Manizha replied. 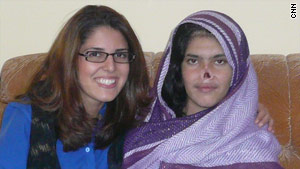 Bibi Aisha is finally getting help and reconstructive surgery, heading to the U.S. this week.

I had been to the WAW shelter a few months before and was deeply moved by the stories I had heard, the openness of the women who shared them and the selflessness of those risking their lives to help these unfortunate women.

And to be honest, I was excited to go back and see them again.

I don't get much interaction with women in Kabul – usually I'm surrounded by both Afghan men and Western men.

And the women at the shelter, beyond their horrible experiences, are just women and girls – like any other around the world. They're full of curiosity about the strangers who have come to visit them, ready to talk about their experiences and courageous despite traumatic pasts.

The first time we met, Aisha was quiet and shy. The women from WAW told me that she was in "one of her moods."

She was a rollercoaster of emotions, they explained...understandable given her traumatic past.

But Aisha slowly opened up – explaining what happened on that horrific night.

"When they cut off my nose and ears I passed out," she said. "In the middle of the night it felt like there was cold water in my nose. I opened my eyes and I couldn't even see because of all the blood."

As the hours passed, she opened up more.

Her laughter and smile held such grace, beauty and mischief all at the same time.

Esther Hyneman, a board member for WAW said, "She's got a personality on her. She called me crazy the other day!"

I turned to Aisha who was in giggles.

I asked, "Did you call her crazy?"

Aisha looked at me still smiling and said in Pashto, "She is crazy!"

And later, as my cameraman and I were filming my piece to camera in an empty courtyard and I stumbled on my words, I heard giggles.

I turned around and there was Bibi Aisha with one of the young girls from the shelter, staring and smiling from a doorway.

Aisha said in English, "I know little English. Say, 'What is your name!?'"

So I complied, "What is your name?"

She responded, "My name is Bibi Aisha."

Her eyebrows were raised with amusement and she had a huge smile on her face after seeing the joyous shock on mine.

Aisha had learnt some English when she spent time with an American Provincial Reconstruction Team that had found her after her "punishment."

But I was more thrilled by the fact that she was giggling and sharing a part of herself with me.

August 2010
After widespread media attention, help from the shelter and the Grossman Burn Foundation based in Los Angeles, California – Bibi Aisha is finally getting help and reconstructive surgery.

I went to say goodbye to Aisha before her long journey from Kabul to the United States. She came in the room wearing a beautiful purple scarf covering her nose and mouth.

At first I saw the shy Aisha again. But it was not long before she opened up and was laughing.

The women working at WAW shared stories of Aisha's antics in the shelter.

With each story shared Aisha kept chuckling and was obviously very proud of her mischief. But at the same time I was reminded that this free-spirited young woman was born in a society where for women freedom of expression and freedom from abuse is a rarity.

When she saw the cover of Time magazine on which she is pictured, there was a glow in her eyes and that gorgeous smile.

She knew the world would know her story. According to the staff from WAW, Aisha wants to share the plight of Afghan women with the world. She doesn't want the Taliban to win again; and she wants an end to women's suffering in Afghanistan.

I asked her if she was excited to go to the United States. She looked up at me beaming a bright smile and nodded her head.

I also asked for permission to get in touch with her when I was next in the Los Angeles area, where I have family.

As a journalist, sometimes no matter how much you want to distance yourself from what you are reporting, you can't. Long after she has left Kabul I know I won't be able to stop thinking of Aisha, just as I'm unable to forget the many other victims in Afghanistan that I've met.