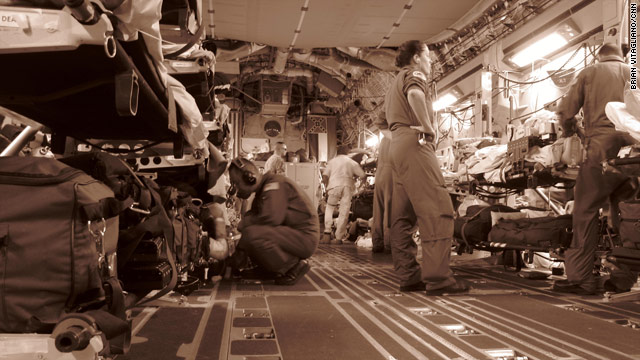 We have just taken off from the front lines of the war in Afghanistan with dozens of wounded troops on board, many on stretchers. One young soldier lies unconscious on a ventilator, with a military physician at his side.

This is an air medical evacuation flight, a flying intensive care unit that brings the wounded out of the war zone to safety. 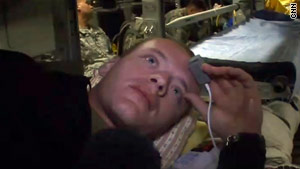 James Dennis was hit twice in the same day by roadside bombs and taken to the hospital at Bagram Air Base. Then he got hit in a mortar attack.

Gardner and her medical colleagues make this run from Bagram Air Base in Afghanistan back to Landstuhl Regional Medical Center in Ramstein, Germany, each week for initial care. Then, a second flight carries the wounded who are ready to leave Germany to military hospitals in the United States.

CNN was granted exclusive access by the Air Force to join this air evacuation flight and then another flight from Germany to Andrews Air Force Base outside Washington. It would mean 41 hours of continuous travel with no sleep for me and my producer, Brian Vitagliano, who carried a small hand-held camera to capture the images and thoughts of the wounded and the medical teams that care for them.

It is not easy for Gardner and the others who see the impact of mortars, rockets, roadside bombs and gunshot wounds on young bodies. For many of the troops she nurses, there is the initial psychological trauma that comes with being physically injured.

"It's hard to read what they have gone through," she told us. "They're so young - I mean, they are 10 years younger than I am."

But their young age belies their experiences in the battlefield, Gardner said.

"It's just amazing what they've been through and that they are alive and they are making it back home," she said. "I could never have guessed the sacrifices they have gone through."

Spc. Mathew Came, 21, is one of those soldiers. We found him onboard lying on a stretcher, being given morphine for the pain of his abdominal wounds, which were visible. Came, a young medic with the 82nd Airborne Division, was on patrol in eastern Afghanistan, tending to other wounded soldiers, when a bullet hit him in the bladder.

As he was given more pain medication, he calmly told us that when he got hit, his buddies went right to work.

"Right away I just went on to talk them through what we need to do, and it all went pretty smoothly," he said.

During World War II, the wounded were first extensively treated in overseas field hospitals, and it could take up to three months before they arrived home. By the time of the Vietnam War, it was down to about a month.

Today, with the ability to medically stabilize the wounded quickly and get them onto air evacuation flights, a wounded soldier could potentially be back in the United States three days after being hit.

It’s a balancing act. Troops must be stabilized enough to be able to withstand the long flights even if they are on a ventilator. But some are so critically injured, the military will try everything to get them home so their families can say goodbye. Since the war began, four troops have died on the way home on medical evacuation flights.

Just getting home can mean everything to those wounded in combat. Army Spc. James Dennis told us he was just waiting to hug his two small daughters. He showed us a prayer good luck charm he wears around his neck, a gift from his children.

For Dennis, that charm has worked. Just a few weeks before we met him, he was hit twice in the same day by roadside bombs and taken to the hospital at Bagram Air Base. Then he got hit in a mortar attack. Today, he is on the flight back to Germany. During the few minutes before being loaded onto the plane, Dennis told us the care from the medical teams eased his worries.

"These people here are awesome. They did their job," Dennis said. "I respect these guys a lot. I have no worries."

Once we got on the second flight, from Germany back to the United States, there were lots of smiles. For some of the troops, the best part about going home was that they were going home together.

We met three soldiers from the 101st Airborne Division out of Fort Campbell, Kentucky. They had served together for months. Their armored vehicle hit a 300-pound roadside bomb. After they were initially rescued and treated, all three were put on our flight on stretchers so they could be flown back to Fort Campbell together.

"We've been together the whole trip," Army Spc. Aaron Nuckolls told me.

With a badly injured leg and back, lying on his stretcher, he pointed to the back of the plane and said, "I know my two guys are back there."

Back there, we found buddy Pfc. Mike Garcia with two broken vertebrae, a broken knee and a broken ankle. It had been his first tour of duty. His big concern: his buddies.

"That's what makes it personal, because we go over there, we are such a small group to begin with," Garcia explained. "And we see pretty much nobody else for the year we are over there."

Garcia said the ultimate bonding of brothers in arms comes when they get hit.

"I can tell you one thing: I am happy with them. I am grateful for them. They helped me out a lot when it happened," he said.

The third man on the team couldn't talk to us.

Staff Sgt. Benjamin McGuire's jaw was shattered in the attack and was wired shut. But we didn't need him to speak in order for us to understand the heartfelt feelings of this soldier at being evacuated out of the war zone with his buddies.

He simply wrote on a pad, "It means a lot that I was able to stay with my soldiers."

I asked if he really thought it helped. He leaned up in the stretcher to write one more time: "Yes ma'am. Without a doubt. In my mind it made my injuries seem not so bad."