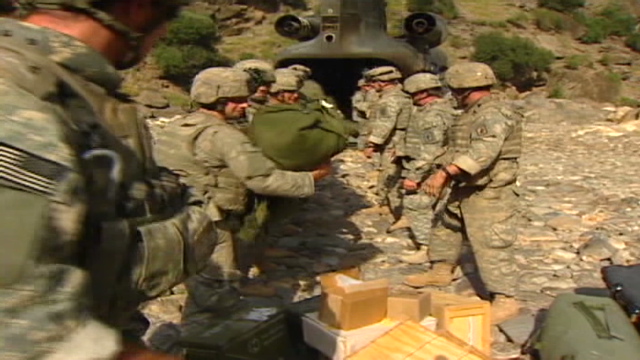 The material details more than 530 separate incidents of ambush-style assaults. While likely only a fraction of the total number of such attacks, taken together they show U.S. and its coalition partners, along with a variety of Afghan military and security branches, were mostly helpless to prevent or anticipate them, which occurred across the Afghan theater of fighting. CNN has been unable to confirm that the documents are authentic.

The summer of 2009 was a particularly busy time according to the documents, as the new Obama administration had begun stepping up the American military presence in Afghanistan. The month of August included almost daily accounts of ambushes, written in the typical dispassionate, acronym-heavy summaries.

A typical example was August 5, 2009, when U.S. forces reported receiving small-arms fire from a populated compound. At least two enemy gunmen were seen "moving in and out of qulats [compounds]." An update 17 minutes later indicates "the fire has ceased and the qulats they were taking fire from now have women and children outside of them. Also report have sniper team set up overwatching the qulats."

The gunmen had apparently vanished, and U.S. air support was brought in as a precaution. The only injury was a sprained ankle to one Coalition soldier.

A day later, a coalition foot patrol came under attack from at least "5 individuals firing heavy weapons and began returning fire with 120mm mortars." The enemy reportedly was carrying old Soviet-style heavy anti-aircraft machine
guns and Kalashnikov assault weapons. As was typical of such assaults, the "AAF [anti-Afghanistan forces] broke contact and ceased firing on the patrol."

No injuries or captures of enemy forces were reported.

Attacks on coalition troops were relatively rare. Most of the enemy ambushes listed involved Afghan military and government forces, as well as possible "soft" targets such as international aid workers and diplomatic
personnel.

One of the most deadly was noted in June 2004. The enemy, according to one message from the WikiLeaks file, "ambushed the car of an aid worker organization in Badghis province, killing all five occupants. Members of the
Taliban have claimed responsibility for the attack. Assessment of the crime scene determined that two attackers committed the ambush while traveling on a motorcycle. They used an AK-47 and a pistol. They did not rob the vehicle."

The report does not indicate who was attacked, but it appears to be staff working for Medecins Sans Frontieres (MSF), a doctors' aid group. The five civilians were killed on the road between Khairkhana and Qala i Naw, and the
incident resulted in the complete withdrawal of MSF from Afghanistan.

The coalition military assessment raises some questions whether the Taliban was actually involved in this episode, and one local intelligence source told the coalition the attack occurred during the harvest season for poppy seeds, used to make opium, so it may have been drug-related. Nevertheless, the report concludes, "the United Nations and Afghan
Non-government Organization Security Organization (ANSO) have recommended that all routes in Qadis District be considered high risk at this time, and all Badghis routes are at elevated risk due to the poppy harvest."

As that incident showed, motorcycles were a favored vehicle on such hit-and-run ambushes. Dozens of such attacks noted usually two gunmen on the motorized two-wheelers, one of them firing a weapon into another larger
vehicle.

A May 1, 2007, message reported the "Czech Republic Ambassador [and his entourage] was under attack. They received SAF [small arms fire] and RPG [rocket-propelled grenade] fire" in the Zurmat District of Afghanistan. The
Czechs were "barricaded in a house with a green door with 2 of the ambassador's bodyguards, both of whom were wounded. They were instructed to wait for assistance" until coalition and Afghan forces could arrive to assist.

The group was eventually rescued with no one seriously hurt. But four Afghan National Army soldiers who had arrived to help were killed in the subsequent fighting with insurgents. Three of the enemy were captured.

Most of the ambushes listed in the WikiLeaks material appeared to be related to destroying or stealing goods and equipment.

A May 2004 incident report detailed how the Waza Khwa police chief and 20 of his officers were ambushed "with 6 jingle trucks loaded with CERP [Commander's Emergency Response Program] that the [local tribal] governor had
given them. The engagement lasted 30 minutes. The police chief feels that the enemy force was about 20 personnel on motorcycles." The police chief also said two of his officers were killed, one wounded. All of the insurgents apparently
escaped unharmed. U.S. forces were too far away to react, the report concludes.

"Jingle trucks" are colorful transport vehicles typical of the Central Asia region, so named for the bright paint jobs and the chimes, chains, or pendants that often adorn the fenders.

And CERP refers to a U.S. military program allowing individual commanders to respond to urgent humanitarian relief and reconstruction requirements within their areas of responsibility.

Financial profit was not the only apparent goal of insurgent ambushes. In another incident from December 2006, U.S. forces were informed that "three local national tractor trailers were stopped. They appeared to have been ambushed and vandalized. The vehicles were carrying civilian leased equipment
(bucket loader, road grader, skid steer and a hydraulic excavator)." The drivers reported that Taliban forces attacked as the convoy headed from Sharana to Ghanzi. Some of the equipment was burned and strafed with bullet holes. Most
of the drivers escaped "except for one driver and one tractor truck that the Taliban took hostage and is now demanding a ransom."

The message does not indicated how the incident was resolved.

In one of the few instances were the U.S.-led coalition anticipated an ambush, military officials in March 2007 summarized an apparent intelligence report. "The Taliban leadership in Tagab Valley believed there were Coalition
and GOA [government of Afghanistan] forces in Sherkhel village... while these forces are in transit, the Taliban plan to attack them with an unknown number of fighters."

Again, the "imminent threat" message does not indicate whether such an attack occurred and whether coalition forces were prepared to counter the enemy.