Death of a man named 'Popeye' 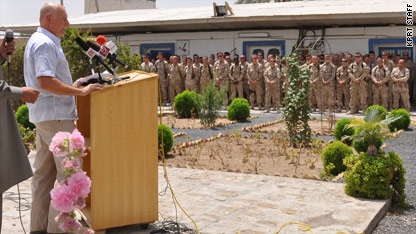 We’d been at Camp Nathan Smith in Kandahar City for a matter of hours when a Canadian Public Affairs Officer offered up a story.

Captain Cynthia Larue was not the type of PAO to try to sell you a puff piece to boost the “good news quota,” but rather someone who knew a good tale when she saw one.

And this, to be sure, was one of those.

The base is on the site of a former cannery, opened in the early 1970s and in its heyday producing thousands of cans of local produce.

When the Taliban arrived in Kandahar in the early 90s, the cannery became for a while a prison, a grim holding area for hundreds of inmates, crammed into a storage area.

Over the months, those inmates drew pictures on the walls with charcoal from the fires they lit to stay warm, or heat their meager rations. They were — and are — haunting images offering a glimpse into their ordeal, and their past.

There are sketches of Soviet helicopters and MiG fighter jets alongside images of farm equipment, peacocks and happier days.

Some had scrawled their names, others their emotions — “death is a friend,” one wrote. Another, defiant, inmate showed his incarceration wouldn’t get him down. “Wherever I am, I am not a poor man” was the message he left for those who came after him. (Here is the original post from earlier this year) 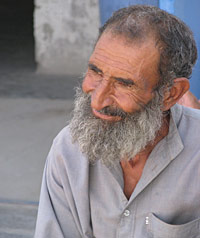 Our guide that day was a 60-something local who, like many locals, looked more like 75 after a tough, working man’s life.

His real name was Faida Mohammed, but, to the troops at CSN, he was “Popeye” (because of his work ethic, we were told) or simply “Hajji” (an honorific reserved for someone who has completed the Hajj, or, often, for an elder deserving of respect).

Popeye had seen the birth of the cannery, worked there through its glory years, witnessed the incarceration of men there by the Taliban, and, now, was still there, in its latest incarnation as a military base.

He watched governments and armies come and go, but never felt beholden to any of them.

“I’ve never felt I work for a government,” he told me. “I’m working for my country, and my family. I care nothing for the politics.”

Still, the reality in a place like Afghanistan is that working on a military base is risky. So why do it? “It’s my home. I’ve been here in this place my whole life,” he told me. “I need to feed my children, and there is work to do here. Why not?”

His role was simple: to keep the generators running, move water supplies around and other necessary but unglamorous tasks.

He performed these with his trademark grin and good spirits, a man loved and respected by all who he met.

And, after our time with him, by us as well. Many on the base would stop to try to chat with Popeye (he spoke no English) and I met one officer who would regularly take a military interpreter along so she could enjoy a "catch up conversation" with him. Another sketched his weathered, character-laden face, a visage where every line told a chapter.

He had but one request — that we hide his face in our report. “Even now, I still fear the Taliban,” he said. “I’m worried they will punish me if they know I’m still here.”

It’s a familiar fear of those who have anything to do with international forces in Afghanistan, or Iraq for that matter, and, of course, we hid his identity.

A few days ago Popeye’s fears were realized.

Returning home after another hard day of work, he was murdered — shot multiple times in the head as he made his way home to his wife and four children. His body was found by one of his sons, alarmed when the family patriarch and chief provider didn’t make it home that evening.

Of course, at the moment, no one knows for sure who did it. But chances are Popeye died because of where he worked — the same place he’d worked for 40 years.

They held a memorial service for Popeye at Camp Nathan Smith last week. The turn out of locals and soldiers was huge.

An Afghan translator on the base, who understandably didn’t want to be identified, said: “We have lost a true friend, and a respected elder of the community. He was the grandfather of this place, working hard as always, hoping to see Afghanistan become beautiful again.”

Popeye told me one day that his secret dream was that, once the soldiers had again gone home, there would be investors who would come and reopen the factory he loved so much, and once more it could churn out cans of local produce.

I’ve lost several friends, numerous colleagues and many, many acquaintances in Iraq and Afghanistan.

Yet, here was a man who didn’t die in a firefight, or an ambush on a highway, or while on a military convoy or even as the “collateral damage” of an errant missile.

He was a defenseless old man who caused no harm to anyone, brought joy to many, and wanted no part of the politics of war. His only mission: To support his family in a troubled time.

In a land soaked with the blood of senseless deaths, the murder of Popeye was about as pointless as they come.