Mozhdah Jamalzadah is an Afghan superstar in a country still struggling with war and a battle between ideologies and cultures.

Born in Kabul, Mozhdah was only five when her family fled to Canada.

"When I was growing up, my parents were like, 'don't ever forget where you're from. And don't ever forget your people because you're one of the lucky ones,'" she says. And she didn't forget.

The singer, in her mid-twenties, came back to Kabul seven-months ago where she is now caught between two very different worlds. "I was an emotional mess when I came here and I realized I might not want to go back (to Canada).," she says sitting inside an armored vehicle driving along the streets of Kabul.

"But then I have my life over there too," she says reminiscing about her family and friends in Canada.

Including one furry friend.

"I miss my cat so much!" she says laughing. 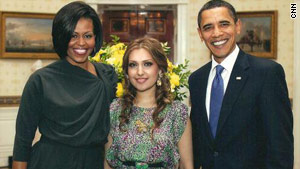 Mozhdah performed at the White House earlier this year and met President and Mrs. Obama.

Mozhdah is a self-proclaimed nerd who loves both of her countries, got her feminist ideology from her father and her best friend is her mother.

She says that all she wants to do is make a difference in Afghanistan.

On this day Mozhdah is making her twice a month trip to a local orphanage. Many of the kids here don't even know how big of a star she is, they're just happy that someone remembers them.

Mozhdah holds their hands and asks them about their studies. And the children read her poems and sing songs in gratitude.

With the help of a local bank, Azizi Bank, Mozhdah is able to bus over 100 children and their teachers to a high-end restaurant in the heart of the city where they will have a luxurious lunch overlooking the capital.

Sensitive cultural issues that are generally not talked about openly in this conservative Islamic society are challenged on her show "Mozhdah."

Likened to an Afghan "Oprah" by some, Mozhdah is using her show to try and help Afghanistan progress.

"What I want to do is tackle really serious issues within the family because I think the family is the foundation to a better nation," she says.

Mozhdah mixes both entertainment and education.

"What we try to do is we try to mildly bring the issues up and you know, mix it up with a song," she says with a giggle.

Mozhdah and her producers say that some within the Afghan government are not happy with Mozhdah's more liberal political views and western-inspired clothing.

Although the Taliban have never threatened Mozhdah, she says she has received many threats from other hardliners within the government and society.

"There were threats that I got, through Facebook, through YouTube. One was: 'someone should put a bullet through her head and stop her from doing this, she's a disgrace to our nation,'" she says.

The government once stopped one of her shows from airing after watching the promos because she wasn't wearing a headscarf - although not against Afghan law, it is considered out of line to many conservatives in the country.

"I guess they realized if I was going to be the host of a show within Kabul and not wear a headscarf, it may start a new trend. Girls might get the courage not to wear the headscarf," she says jokingly making light of the situation.

Although Mozhdah is mindful of her dress she says she will continue to talk about the tough issues.

This week's shows are about divorce - a taboo topic in Afghanistan.

And although she is a bit nervous about the reaction the traditionalists may have she feels strongly about educating the Afghan population. Bringing in a marriage expert to answer questions and having actors role-play a family going through a divorce.

"I'm not the type to get scared too easily but when the issues get really intense, there are a lot of people who are going to get annoyed by me," she says. "And if they get annoyed, it's not the States or Canada where I'd get a threat and call 911 and file a complaint. That's not how it works here. If they want to get rid of you, they get rid of you."

A grim reality she chooses to live with because Mozhdah refuses to give up. She says that most Afghans, after decades of war, just want some kind of change.

"They've never had the chance to grow or evolve and their dying to."

Mozhdah hopes that she can be, even a small part, of that change.