A dangerous job in Kandahar

KANDAHAR, Afghanistan — It takes guts to be a policeman in Kandahar. You're a prime target for the Taliban, the local population has little trust in you and until recently you were ill-trained and ill-equipped.

All of the above may have changed only slightly but police commanders say things are at least moving in the right direction.

Mohammad Shafiq Afzali is police commissioner in charge of six provinces. Little surprise, he rarely finds time to leave Kandahar. He acknowledges the support of the locals is lacking but insists it's changing as the image of the police is improving.

"Before police were getting $40 to $50 a month, now they're getting around $250. When anyone's financial problems are solved they no longer want to do dishonest things," he says.

The convoy of a police chief, Fazal Ahmad Sherzad, was attacked by a double bomb blast, in a car and on a motorbike last month. He wasn't in the convoy at the time. He tells me he also survived an IED attack a few days ago. In the next breath, he says there is not that much violence in Kandahar. He says it with a straight face. 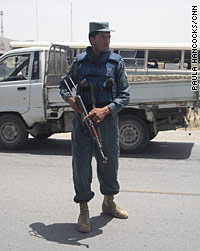 While on patrol with Sherzad, we pass a number of mobile checkpoints trying to prevent the Taliban or any other insurgents from accessing the city but the police have no estimate of how many fighters are already here.

Most attacks are by motorbike these days. The city is swarming with motorbikes, though, and the police struggle to stop more than a handful during our patrol.

The local estimate is there have been more than 20 assassinations in the past month, which CNN cannot confirm. But the rumor itself is enough to strike more fear in the hearts of half a million people in the city and to erode any confidence in the police ability to stop the violence.

There are police deaths most weeks in Kandahar but at the same time there are more patrols on the street and a stronger American presence in the heart of the city. We see a number of the M-RAP armored vehicles rolling through the streets with local traffic swerving to get around the cumbersome giants. It's a sign of the buildup toward increased military operations in the southern province.

One policeman says he is waiting for NATO to step in to make life easier for him on the beat. But as international and Afghan forces secure the surrounding areas of Kandahar, more fighters move into the heart of the city.

At police headquarters, the new recruits are being put through their paces. U.S. Marines help with the training. "We'll get more advanced with them on defending themselves in ambushes, and if their police station's attacked by the Taliban, we'll help them out with those defensive techniques as well," says Lt. Col. William Defrancis.

A few hours after we leave, three suicide bombers tried to infiltrate a police station down the road. Four policemen were injured in a gunfight, but the attackers were repelled.

Just another day on the beat in one of the world's most dangerous cities.