The Karzai they knew

Eric Blehm is the author of the recent Wall Street Journal and New York Times bestseller “The Only Thing Worth Dying For: How Eleven Green Berets Forged a New Afghanistan.” It is the story of ODA 574’s mission with Hamid Karzai in 2001, which resulted in his rise to power as the leader of Afghanistan. The statements and opinions expressed in this guest blog are solely those of Eric Blehm.

On Mother’s Day, I read the headlines about Afghan President Hamid Karzai’s highly publicized meetings in Washington, D.C., this week, and I couldn’t help but think about Barbara Petithory of Cheshire, Massachusetts, and Linda Davis of Watauga, Tennessee.

Their sons were the first American soldiers killed in Afghanistan back in 2001 — number one and number two of what is today more than 1,000 Americans who have died from action there (1,744 total coalition forces KIA). Their pride and grief as Gold Star mothers are intertwined around the headlines on Hamid Karzai because their sons were with Karzai when they were killed on December 5, 2001. His legacy is, in part, theirs. 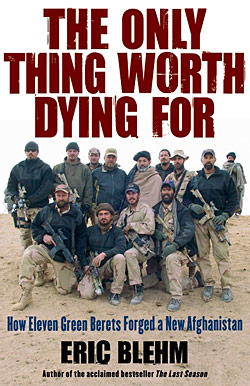 Like most Americans, Linda and Barbara had never heard of Karzai back in 2001. Their only connection to Afghanistan was the suspicion that their Green Beret sons were either in that country or headed there. Every morning, since Danny’s last phone call in early October, Barbara would go out on her front porch, gaze over the Berkshire hills, and adjust the American flag draped from an angled staff. For her, the ritual was reminiscent of fixing her son’s collar when she sent him off to school when he was a little boy. She couldn’t look at an American flag without thinking of Danny. It’s the same now, each time she sees an article about Karzai.

So on Mother’s Day, I contacted Linda and Barbara to let them know that I remembered Danny and Donnie or, as it is chiseled into their gravestones, Sergeant First Class Daniel H Petithory and Master Sergeant Jefferson Donald Davis. Their sacrifice still resonates in the current headlines because they, and their fellow team members from Operational Detachment Alpha 574, were directly responsible for Karzai’s rise to power. In fact, if it were not for the actions of ODA 574 — their mission became the most politically significant mission in the Global War On Terror — those headlines would be very different.

In war, individuals or small groups of people sometimes find themselves in a position to influence events that shape history, for better or for worse: I submit as a profound example, Captain (at the time) Jason Amerine — a junior officer — and his eleven-man team of Green Berets (ODA 574) that included Master Sergeant Davis and Sergeant First Class Petithory.

In the weeks after 9/11/2001, Captain Amerine and ODA 574 were the first American soldiers dropped into the south of Afghanistan — the most dangerous part of the country, the Taliban heartland, the Pashtun tribal belt — along with Hamid Karzai, a virtual unknown on the international stage at the time. ODA 574 made the decision to do so far from the flagpole (without the influence of the White House or the Pentagon) after meeting with Karzai and the tribal leaders who supported him.

These Green Berets believed in their mission to aid Karzai’s budding rebellion, and they believed in the man himself, whom they came to respect as a popular unifying figure in the Pashtun tribal belt. Together, ODA 574 and Karzai created a plan to engage the Taliban in the south with crushing airstrikes while avoiding any civilian deaths. As a result, the Taliban surrendered to Karzai only three weeks after ODA 574 had infiltrated the country with him, mostly because their actions had led to his credibility as a warrior not just a diplomat. If the Northern Alliance leaders, whom our U.S. Forces were also supporting in the northern part of Afghanistan, had marched down into the southern tribal belt, there would have been civil war.

Most believe Karzai was “installed” into power by the United States. In fact, it was almost an accident that he rose from obscurity to become president at all. This is not to say he wasn’t the best man for the job at the time. Or now, for that matter. Whether or not you support what ODA 574 did with Karzai, the fact remains (as so eloquently stated by the famed cultural anthropologist Margaret Mead): “Never doubt that a small group of thoughtful, committed people can change the world. Indeed, it is the only thing that ever has.”

When I interviewed President Karzai a year and a half ago, I showed him a picture of ODA 574 and, unprompted, he told me the names of most of the men, every one of whom had been killed or wounded during that three-week mission. In some cases, he recalled their specific rank or specialty — the medic, the radio man. This was some six years after that fateful day, when Karzai himself was nearly killed. Since then, he has survived multiple assassination attempts. He has been hailed as a hero and scorned as a corrupt politician. He has begged for international aid. He has, in spite of his flaws, held his country together.

But even through all of this, Karzai remembered where he’d come from — and who had gotten him there. He remembered exactly who had died in the process, both American and Afghan. And he honored their memory.

That told me a lot about the man.