Amid helicopter gunships overhead, men danced and Afghan National Army troops marched during a Kabul ceremony on Wednesday to mark the 1992 toppling of the Soviet-backed regime.

The former Soviet Union, which once shared a border with Afghanistan, invaded Afghanistan and installed a puppet regime in the capital of Kabul in 1979. A long, weary guerilla war between various Afghan resistance groups and Soviet forces ensued. In 1992, the mujahedeen declared Afghanistan liberated. The Taliban gained control a few years later.

The Wednesday ceremonies, which spectators and government officials attended, also included a 21-gun salute and speeches. It was held at a sports stadium in the central part of the city, which was used as a public execution ground by the Taliban regime from the late 90s into 2001.

Afghan President Hamid Karzai is attending a summit in Bhutan. In 2008, the ceremony was marred by an assassination attempt on the leader. 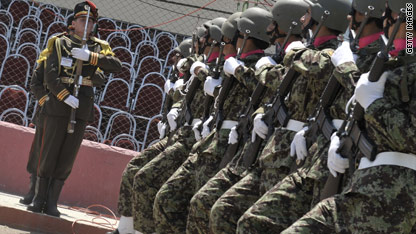