A risky profession in Afghanistan

KANDAHAR, Afghanistan — There are "press clubs" the world over, from Hong Kong to Sydney, New York to New Delhi — places where journalists can gather, network, maybe grab a drink.

Some are small and convivial, others large and even ostentatious.

But I can’t think of any with armed guards on the roof, and surrounded by concrete blast walls.

Welcome to the Kandahar Press Club.

Afghanistan is a nation full of risky professions, and being a local reporter is right up there near the top of the list.

There is a vibrant media in Kandahar — Afghanistan’s second biggest city. There’s radio, TV and newspapers — most of them, according to Western civilian observers, remarkably independent in their reporting.

I did a report for CNN, but will admit my primary motivation for jumping in the back of a Canadian armored vehicle for the ride there was to show solidarity with colleagues who take far more risks than me when it comes to covering this conflict.

Western journalists usually have either military or their own security protection when they go out to cover a story.

If you’re embedded, you’re surrounded by well-armed soldiers, and travel in armored vehicles. If you’re not embedded, most media have some degree of private security looking out for their safety.

If you’re an Afghan, grab your notebook or camera, and off you go. You’re on your own in a place where the wrong sentence, the wrong headline, the camera pointed at the wrong person can cost you your life. 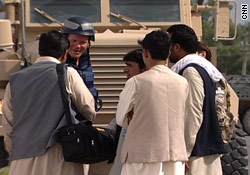 Talking to journalists outside the new press club. Photo at top: Afghan journalists wait inside.

I mingled with my Afghan colleagues, and all of them either knew a journalist who had either been killed or threatened or intimidated. Several had their own personal experiences.

One who I agreed not to name told of late night phone calls to his home, telling him to get a new profession after he’d written about security issues in his city, specifically Taliban infiltration.

He’s still on the job.

“It’s not about me,” he said. “It’s about getting the truth to the people. If we all quit because of pressures or threats, there would be no one doing the reporting.”

Lots of journalists take varying degrees of risks, but those who put their lives on the line to tell the story are, to me, in a category all their own.

“It’s difficult, quite difficult to be here and working as a journalist, because it’s risky to go around and get your information – it’s a bit hard,” says Taimoor Shah, who works for the New York Times in Kandahar.

“We have lost three or four colleagues in the south (in recent years) – it’s a big tragedy for us.”

In its 2010 "Impunity Index," the New York-based Committee to Protect Journalists said Afghanistan had seven cases where journalists were murdered and the government failed to find the killers.

What struck me most was the defiance in the face of such risks — no one I spoke with even contemplated the notion of surrendering their profession to pressure, or news of a colleague’s death.

They were to a man (I didn’t see any women journalists, by the way), gripped in the embrace of what they see as a noble calling — reporters prouder than any other I’ve met to be doing their jobs. 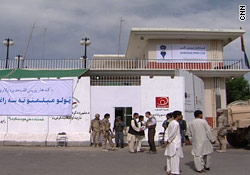 Sadiq Khaliq is one such man. A handsome, youthful chap who reports and anchors for Heward TV, he seemed almost blasé about the risks versus what he called the "honour" of doing the job.

"Being a local journalist can be a difficult thing — there are great risks, particularly as the violence increases, but we feel what we’re doing is very important and we must continue," he said.

“This is our country, our people, which makes us want to do our work, and my friends here feel the same way.

“As journalists we feel proud — honored — to let the people know what is the reality in their city.”

That reality, sadly, includes continued attacks by the Taliban.

In our week or so in the city, there were four suicide bombings and the assassination of the city’s deputy mayor – shot in the back of the head as he prayed in his local mosque.

The reporters I’d met chatted about the NATO operation already under way in their city, and the districts surrounding it, and wondered what it would bring when it was over — more security, or less.

Now they have a place to meet and talk about such things — their own Press Club.