Behind the scenes: The Marines embedded in memory

Editor's Note: CNN camerawoman Mary Rogers accompanied a U.S. Marine Corps unit on Operation Moshtarak in Marjah from its preparations into the first few weeks. A veteran of warzone reporting, she has filmed in places such as Somalia, Sierra Leone, the Congo, Iraq, Chechnya, Israel, the West Bank, Lebanon and Afghanistan in 2001 and 2002. Here is part 2 of her reflections on her time in Marjah and a behind-the-scenes look at the challenges and camaraderie reporting from the Afghan battlefield. (Read Part 1 here)

Many times on assignments there have been people I have been instinctively drawn to (or my camera naturally gravitates to). I do not know why this is. They are people who I will never forget. Most of them spoke a language I did not understand. Not so with the Marines in Marjah. Perhaps what made this assignment so special was that I shared a bond of nationality and language with the men of Alpha Company. Here are a few of my recollections about the men with whom we slogged through Marjah.

CAPT. CARL HAVENS: The quiet professional. From the get-go, I had a good feeling about this unassuming, competent man of integrity. "Carl is not a grandstander by any means," his wife Deana tells me. (I e-mailed Deana Havens after our embed.) 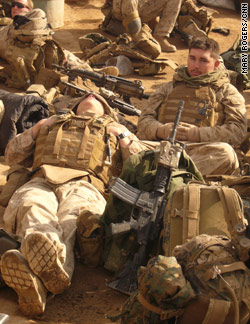 Above: Drying out after a rainy night. Photo at top: Alpha Company taking a much-needed break

I could sense the weight of responsibility he felt for his men and the mission before the operation kicked off. D-Day was originally set for February 12. Then, a 24-hour delay. A smile lit up Haven's face when it was finally time for the mission. "It's pie time! Let's go get some," he said to his Bravo Company counterpart Capt. Sparks.

Atia, Gordon and I mostly kept out of Haven's way as the days of the operation rolled by. We were busy covering the activities of his men. But he never failed to find us and brief us on the latest information.

Havens carries a small laminated photo album of his wife and three children. His wife Deana made it for him. She agrees with me that he has the greatest laugh - a big full-bodied one. "It was one of the things that attracted me to him to begin with," she says. "and one of my absolute favorite sounds. I think one of the things I miss most right now is that laughter in my house. And I know for sure my kids miss it. Daddy is much more fun than mommy in the Haven's house!"

CHARLY MABRY: Combat cameraman. With his cool laid-back surfer style, Charly became a regular in front of my lens, always ready with a funny comment for the camera. But, there was a deeper side to this 23 year old. I glimpsed Charly one day reading some serious literature, Cormac McCarthy's "The Road." This was not the usual mind candy I saw some other Marines reading. I asked him why he was reading something so heavy out here. He told me he was making some life changes. Charley had been hit with some tough personal losses a few years earlier, including the collapse of his marriage. "At that time I was so young I did not deal with it well. I wasn't there for her," he tells me. So Charly, at the ripe old age of 23 was working on himself. On our last day with Alpha, Charly told me: "I got to go save the world now, one camera frame at a time." (Watch as he describes his "tasty" MRE)

LANCE CPL. CLAYTON BLUNT: "Mr. Hollywood." I called him Mr. Hollywood because of his cool-looking sunglasses and his winning smile. But mostly because he was a natural on camera. We met him for the first time on our third day in Marjah in the Loy Chareh bazaar. Some of Alpha had pushed further into the bazaar the day before. The Loy Chareh bazaar resembled a ghost town in a Western movie. Dusty. Deserted. Rundown. Wind whistled through the otherwise spooky silence of the bazaar. The only thing missing were tumbleweeds. But Taliban snipers continued to harass the Marines. So we got with a squad of Marines who escorted their sniper unit up to assist the men.

Taliban sniper fire crackled through the air. We took cover alongside some ramshackle buildings, waiting to race through this sniper's crosshairs. One Marine yelled, "Alright everyone get ready ... cover fire, GO!" Cover fire laid down, the first few Marines raced across. Then our turn. "We're going to do the same thing, you're going to go behind this Marine here ... ready GO!" We dashed across a dusty pot-holed road, something we would do a few times, as we make our way to Cpl. Blunt.

Blunt showed us an opium cache the Marines have discovered. "We found processed and unprocessed heroin, tons of bags, no jugs, just bags of it," he told us.

The company pushed further west. We were on patrol with them all day, watching them interact with the local population. People were coming out of their houses now, speaking to the Marines about their concerns. One of those concerns was the lack of food. The bazaar had been closed for awhile now, and they were running low on food. Sgt. Neil Terranova (Blunt's best friend) tells his Afghan translator, "I'll see what I can do. I'll get some MREs or some HALAL meals." Then BOOM! "Controlled det," says Terranova. The EOD team has found an IED nearby. Some Marines continue to hand out candy to the children. One Marine gives away a very nice pen. 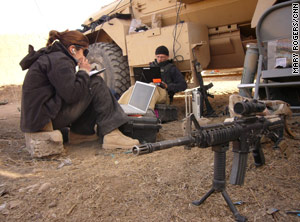 CNN's workstation while in Marjah

Alpha Company had to find a place to spend the night. An Afghan man offered his mud-hut compound for one night, in exchange for some food and a nominal rent. He moved the women and children out, and the Marines, their Afghan National Army counterparts and CNN moved in. The accommodations were extremely rudimentary: No electricity. No plumbing. A large dirt courtyard, two small mud rooms and an open-air bathroom with a small mud wall for privacy. Roosters and chickens occupied the bathroom. One way of dealing with all this rough living was humor.

Atia and I decided to shoot something for BackStory, a show on CNN that takes viewers behind the scenes of television news gathering. We made our way up to Blunt lounging on the cold dirt ground with his best buddy Terranova.

"Mr. Hollywood," I shouted, "Say something for BackStory. How are you enjoying your tour?" "I'm just out here sunbathing in Afghanistan, just getting comfortable," he says.  (Watch more as Mr. Hollywood describes his luxury accommodations for the night)

LANCE CPL. MATTHEW GORKIEWICZ: He wore a red doo-rag bandana, and carried a small stuffed reindeer in his backpack. 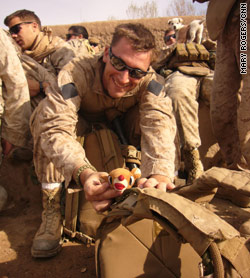 I first met him at what I called "Fort Apache," the blown-up school, which was Alpha's second objective on this operation. I snuck up behind him and ask "Who's in your backpack?"

"Rudy," he replies. "He's got my 6." (Marine lingo for "my back.") He told me he always carries Rudy and got him in a package from home last year. Rudy was Matt's good luck charm.

"Matt's a nuclear physicist!" his buddy told me. "He's got the big bang and little bang theory." Matt pulled out two grenades. Written on one: 'Little Bang Theroy!' The other: 'Big Bang Theroy!' I point out - gently in the circumstances – "I think you might have misspelled 'theory.'"

"Oh well," he laughs, "we're Marines! We're retarded." Matt is not retarded. Matt is a man who can laugh at himself. On our last day with Alpha, Matt blew a kiss to the lens for his girlfriend back home. "Love you, Sam" he says, and he is out the door. 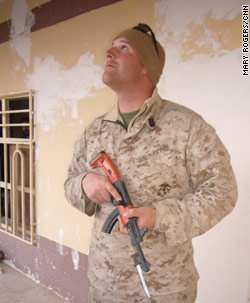 DOC NICHOLAS VANCINI: A Navy medic attached to Alpha. The Doc is a big, gruff-looking Italian American. He was not exactly enthusiastic about being on TV. Initially. We met the Doc on D-Day. It was late afternoon at the Marjah Marriott (my nickname for a compound in the Loy Chareh bazaar) that became Alpha's base of operations for a few days.

I spotted the Doc with an unusual weapon. He struck a pose for my happy snap still camera. Atia whipped out her flip-cam. "Where's your new toy?' she asked. He whipped out his weapon, "It's an AirSoft AK" he said. Atia played along. "Do you think it's going to protect you?' The Doc shot back at her: "Absolutely not!" and laughed. "I'll give it to a kid." The Doc's Airsoft AK was a toy gun.

Doc Vancini's job is to take care of Marine casualties and get them Medivac'ed out. I film the Doc helping a local Afghan man who was shot in the leg by Taliban sniper fire. He thanked me for putting him on TV – his wife saw him on CNN back in the States.

GUNNERY SGT. BRIAN WALLGREN: A larger than life character, straight out of central casting. The Gunny was suspicious of the press and extremely camera-shy. "I can only be filmed on Thursdays," he told me. Of course, every day is Thursday for the Gunny.

"You will always see him with a mug of coffee in his hand," said Capt. Haven. "But, when he puts down that coffee and picks up a weapon, you know there is trouble!"

The Gunny is a two-fisted drinker of high-octane caffeine-injected fluids. In one hand the coffee, in the other a can of Rip It, an energy drink. I did manage a rare sighting of the Gunny with neither coffee cup or energy drink, and quickly shot the moment for posterity.