Behind the scenes of the battle for Marjah

Editor's Note: CNN camerawoman Mary Rogers accompanied a U.S. Marine Corps unit on Operation Moshtarak in Marjah from its preparations into the first few weeks. A veteran of warzone reporting, she has filmed in places such as Somalia, Sierra Leone, the Congo, Iraq, Chechnya, Israel, the West Bank, Lebanon and Afghanistan in 2001 and 2002. Here is part 1 of some of her reflections on her time in Marjah and a behind-the-scenes look at the challenges and camaraderie reporting from the Afghan battlefield.

In all my years with CNN, Operation Moshtarak was one of the roughest, toughest assignments I have ever had. It was also one of the most memorable, an experience I wouldn't trade for the world.

D-Day: February 13, 2:30 a.m. local time, somewhere in a farm field on the outskirts of Marjah, Helmand province, Afghanistan. Operation Moshtarak begins.
Cold. Dark. Muddy. Miserable. "What in the HELL have I gotten myself into?" These were my first thoughts just minutes after exiting a helicopter with the Alpha 1/6, USMC. Tripping and stumbling in deeply furrowed farmland. Falling not once, but three times! "You are such a dork, Mary," I say to myself. "Wonderful first impression you are making here!" Later that day I was to learn that I was not the only "dork" in the dark. My colleague CNN correspondent Atia Abawi fell twice, and so did many of the Marines, even though they have night vision goggles. 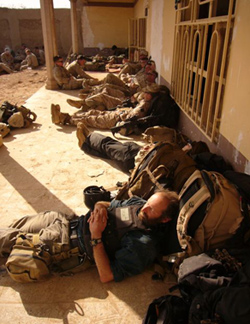 Above: Grabbing some rest at the 'Marjah Marriott.' Photo at top: This photo sums up Fiddler's Green to me.

11 days earlier, Camp Leatherneck in Helmand province, Afghanistan
The Marines bring all the press corps assigned to cover Operation Moshtarak in early.  Hurry up and wait. Looking around the press tent (a hack hotel), I recognize a few faces from other war zones I have covered for CNN in the past two decades. Same faces, different places. Most of these journalists are heavy hitters, long having earned their PhD's at the university of conflict coverage. A few are freshmen and women, including my colleague Atia, CNN's Kabul correspondent. She will be OK, I thought. All of us were warzone virgins once, and we are with some of the best-equipped, best-trained and most professional fighters in the world: the U.S. Marines.

My main concern is which unit we will be attached to. I am praying it will be an armored unit.  They have electrical power on those vehicles – a godsend to the press in the field. We would be able to get our video out.

Next stop: Fiddler's Green, a base for Charlie Company, the Marine's armored unit
Power! Vehicles! It is here that we find out just exactly what our assignment on this embed will be. With a glint in his eye and a smile, the Marines' public affairs officer tells us, "You, CNN, will be with the Alpha Company on the main effort,  an air assault into Marjah."

"Air assault, main effort" – we just won the grand prize in the embed coverage sweepstakes.  "Power? Vehicles?" I ask. "Don't know," he replies. We learn they could come in anywhere from two to six days after D-Day. AAARGH! I scream silently. How am I going to get our material out? If only I was shooting a documentary. (Watch more on our "honest feelings" about riding with the choppers vs. armored vehicles)

Onwards: February 10, Camp Dwyer, a forward operating base in Helmand province
We join up with the Alpha 1/6, the Marines we would be embedded with. We meet with Capt. Carl Havens, who to me resembles the actor Russell Crowe.  He gives us an intensive briefing of what to expect on D-Day, if all goes down as planned. But nothing is ever certain in war. Capt. Havens modestly admits this is his first time on the "main effort"  of an operation. First objective: to take the Loy Chareh bazaar. Second objective: to take the Marjah District Center. The Marines think it's a government building. It later turns out to be a ruined, battle scarred high school, built by USAID in the late 1950s.

Four hours til D-Day, February 12, 10 p.m. local time, Camp Dwyer
We muster hours in advance with Alpha Company near the flight line. Hurry up and wait. It is here where we will board the helicopters for the air assault into Marjah.  Havens speaks to the men: "We are the quiet professionals. We go out there, we get our tasks, we do our job, and we do it well. And we don't brag about it." (Watch more of Havens' speech to Alpha Company.)

More hurry up and wait. I check with Havens for the umpteenth time about what time exactly CNN can go live with the information that the operation has begun. "At 2 a.m. local, when I am on the ground in Marjah," he tells me. I never did ask him if his were the first boots to hit the ground on this operation.

Finally, time to board that chopper. We pass by the first casualty of the operation. A Marine lies on the ground with a twisted ankle. Not an auspicious start.

The chopper ride
Strange – I don't feel any pangs of fear or apprehension. I have never had a deathwish, and usually in most warzones my guts are in knots. "Take calculated risks" has always been my motto. A few times I have even had an almost super psychic intuition that says: "Mary, stop and film from here and go no further!"  So why no fear as I board the chopper? Perhaps I am too preoccupied with the practicalities, fixated on the all-important issue of power and how we get what we shoot to the network. 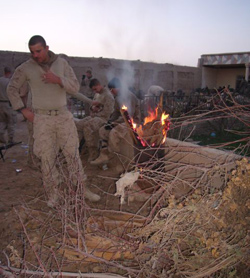 Staying warm was sometimes a challenge

D-Day, February 13, Dead of night, farm fields outside Marjah
Time is moving excruciatingly slowly. We move to a staging area for the push into Marjah. Casualties bog the Marines down. One Marine has asthma and is having trouble breathing, we hear over the crackle of radio traffic. He ends up getting hypothermia. Someone else has torn their ACL.

We sit and wait until the Medivac choppers can come in. Can this night get any colder? Yes, it can. Atia, producer Gordon Duncan and I lay down on the wet, freezing ground and huddle  for warmth. At some point she throws her leg over me. "You generate a lot of heat Mary," she tells me. Was she hallucinating? I was freezing! Then the call of nature comes. "Atia," I whisper, "I have got to pee!"  "What about the Marines?" she asks. "They have night vision!" I so do not care. I crouch down in the largest furrow I can find ... whatever it takes. But finding relief in a dark, rutted field wearing a flak jacket is no easy task.

D-Day, February 13, Dawn, outside Marjah
Yes! Yes! Thank you, God! Beautiful, big orange ball of sun! Golden!Cinematic! Hollywood could not have asked for more beautiful light. I glance over at Marines bathed in a beautiful aura of golden light and begin to roll. (Watch more video of the troops at dawn in Marjah)

The explosive ordinance disposal team clears the way of possible IEDs. In the days ahead, these men will play a deadly game of hide and seek. It is unknown how many IEDs the Taliban have hidden in Marjah.

We start moving. The Marines slowly make their way towards their first objective, the Loy Chareh bazaar. There is sporadic Taliban sniper fire. I quickly glance around and see no Marine within my eyesight return fire. Oh well, if they are not too concerned, I won't be either.

More sniper fire ... and then ... technical difficulties. My camera starts to go on the fritz!  The nightmare of any photojournalist  – just as we have the chance to shoot exclusive pictures in perfect light. It's not as though I can put a pause button on what is happening, and say "Wait Marines and Taliban, I need a moment to figure out this problem!"

Half of my images disappear into some video deadzone, never to be recovered. I have no publishable words for how I feel about this.

We make our way into the main compound of the Loy Chareh bazaar. The fight to rid Marjah of the Taliban begins in earnest. Atia, Gordon, and I are to spend 10 days with the Alpha Company. We will see how the Marines engage in battle, how they deal with the local population and the extremely rough living conditions. And perhaps most importantly, how they deal with each other.