Making it to Marjah

After sitting and stewing in one military base after another for six days, we were finally going to Marjah.

We all awoke of our own accord around 1:30 AM, quickly packed our things and made our way to the transport area of Fiddler’s Green, an absurdly idyllic name for a Marine base that was neither green nor anything to fiddle about.

After a quick briefing by the officer in charge of our convoy (“red smoke for danger, green smoke for a routine breakdown”), we piled into our armored personnel carriers and left, without the slightest hint of regret, Fiddler’s Green. It was pitch black but for the lights of our long convoy, and bitter cold. The Marine sitting in front of me said if there were no IEDs along the way, the journey to Marjah would take half an hour to 45 minutes.

Three hours later he told me, “This is where you get out.” No IEDs disturbed the convoy so I have no explanation for the time it took.

With a quick "Thanks," I stumbled over the guns and backpacks and jumped into a dirt road in the dark.

We had arrived. Our embed with the Marines was finally beginning.

[cnn-photo-caption image=http://i2.cdn.turner.com/cnn/2010/images/03/07/story.office.jpg caption="Cameraman and editor Simon Payne works in our Marjah office."] I’ve never been enthusiastic about the embed system. It puts you too close to one side of the story: the military, but it can distance you from the other side of the story: the people directly affected by the military operation. But given the circumstances, embedding was the only way to get to Marjah.

We were hoping to go out on patrol on the outskirts of Marjah with a Marine unit on our first day, but all plans had to be cancelled because Afghan President Hamid Karzai was coming to town. Marjah would be in lockdown, I was told.

A group of Marines was leaving the District Centre to provide back-up for Afghan security at the Government Centre, where President Karzai was scheduled to meet with townspeople, so we tagged along.

There wasn’t much going on however, just small groups of people lining up to be frisked before going inside the compound.

Up the road, the scene was much more promising. Shops were open, street vendors were out. So up the road we went. Dis-embedding couldn’t have been easier.

In an open-fronted bamboo shelter, blacksmith Ibrahim Ali was forging sickles. I asked him if he was aware that President Karzai was coming to Marjah, and what, if he had a chance, he would tell him. He was indifferent. “Just let me do my work, and I don’t care who runs this town,” was his reply.

[cnn-photo-caption image= http://i2.cdn.turner.com/cnn/2010/images/03/07/story.marjans-watching-us-f.jpg caption="The residents of Marjah watch us film."] We had picked up a translator, Muhamad Mustafa, who normally works for the Marines. “It’s dangerous to go any farther,” he warned me when I started walking toward the crowds.

But having worked in plenty of places where hostility was never far from the surface, I didn’t feel any here. People looked me straight in the eye, I looked back and smiled, and they smiled back. Sounds naïve, but it works. Most of the time, at least.

Across the street from Ibrahim the blacksmith I met Muhammed the shopkeeper. He was skeptical about the American presence and the return of the central government. The government is corrupt, he told me, and the Taliban weren’t.

He didn’t consider himself a Taliban sympathizer, but he wasn’t ready to throw his lot behind Kabul just yet. 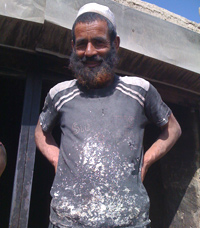 “If they rebuild our village, and pave the street, and build schools and factories, we’ll be happy,” he said, adding, “If they don’t do that, we’ll never be happy.” (Watch video of on the streets of Marjah)

Further up the main road, we found a bakery. The man who ran it — I didn’t get his name — said he was happy government forces had returned. The reason: “business is better.”

As I was speaking with him, I turned around to see a tall Marine, Col. Randy Newman, buying a pile of hot loaves. He was accompanied by two fully armed Marines, but he wasn’t wearing a flak jacket.

In the gung-ho manner one takes for granted in the Marines, he was unflappably upbeat.

“A week ago there wasn’t anyone here,” he said. “There were no Americans, no Afghan soldiers here. And now you can see, we’re able to buy bread and meat. The Afghans are able to go on with their commerce. It’s all good signs.”

But soon he was reminded that the military operation in Marjah is only half the battle. An old man with a white turban approached him with a neatly folded piece of paper listing damage to his home he said had been caused by the coalition.

[cnn-photo-caption image= http://i2.cdn.turner.com/cnn/2010/images/03/07/story.marjah-marine-haircut.jpg caption="A Marine gets a haircut in Marjah."] Through his translator, Col. Newman said, “We will take care of him. I just need him to come to Building 26 on Tuesday and see the Marines there, and they’ll take care of him.”

I saw in Iraq, and I know it’s happened in Afghanistan after the fall of the Taliban in 2001, how leaders often mistook military victories for political triumphs.

It’s early days in Marjah. With prudence, patience and deep, dollar-filled pockets, Marjah might avoid slipping back, as it has done twice since 2001, into the hands of the Taliban. It might prove a difficult task, however, with an Afghan government afflicted with endemic corruption, and a U.S.-led coalition already turning its attention to the next phase in its offensive against a resurgent Taliban.

A seasoned European diplomat once told me the United States suffers from ADD: Attention Deficit Disorder. It can pull off stunning military victories, the diplomat noted, but quickly lose interest and enthusiasm when it comes face to face with the messy, complicated business of managing the minute details of another country’s existence.

In Marjah we shall see if that diplomat was right.