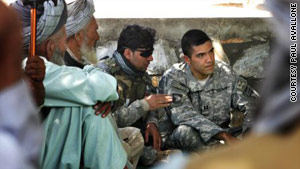 Roger Hill, a former Army captain (right), meets with Afghan elders in Afghanistan with his interpreter next to him.

The case of Roger Hill, a former Army captain who received a general discharge for his role in the questioning of 12 Afghan detainees, prompted CNN's investigation of what's known as the "96-hour rule." Under the rule, NATO troops have 96 hours to either turn over detainees to Afghan authorities or release them - a rule put in effect to avoid Abu Ghraib-like offenses. But now that rule is under review by U.S. Defense Department officials, a spokesman for the department told CNN.

Soldiers interviewed by CNN said it could put them in danger because it forces them to release detainees in a short time span. For Hill, the 96-hour countdown began when he took 12 men he suspected were possible spies to a small building on the base.