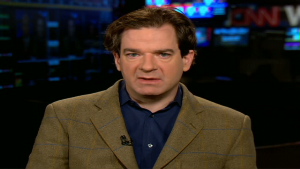 BERGEN: The biggest differences that we've seen in this whole operation from previous operations in Helmand is the size of the Afghan military force. You may remember when the Marines went into Helmand in July of last year - one of the big criticisms is there are very few Afghan soldiers that went along with them. Now it's very different in this operation. So that's one difference.

And obviously, General McChrystal's important recommendations about really reducing civilian casualties have made a difference about the tactics that are used in this fight. And we will see how that works out.

You know, when the Marines went into Fallujah several years ago the first time around, there were a fair number of civilian casualties. They're taking a different approach with this assault on Marjah, which is still a major frontal assault on a somewhat large town. But it is being done in a rather different way.

Q: Talk about the greater number of Afghan forces this time - does that make a difference? Are you saying sheer numbers help or is it more a point that the civilians there need to see more of their own out there as a part of this fight?

BERGEN: I think the latter, very much so. The American and NATO exit strategy from Afghanistan is an effective Afghan army. And so far we've seen, very limited evidence of any really effective Afghan army units. If they're effective in this fight, that's a good indicator of sort of progress on that front.

Q: From what you've seen and heard, what stands out to you as to how this offensive is going?

BERGEN: One thing that stands out to me which is a bigger issue is why we are conducting these massive operations in Helmand where a rather limited amount of the Afghan population actually lives. I mean, the center of gravity of the Taliban is not in Helmand, it's in Kandahar, in the neighboring province. It's where a lot of the leadership comes from. But there are some good reasons that we are in Helmand.

If Helmand were an individual country, it would be the world's single largest producer of heroin. It is in a sense, the bank of the Taliban. That's important. Marjah is the center of this business. However, at the end of the day, this is not a game-changer for southern Afghanistan. A game-changer for southern Afghanistan is essentially retaking the areas around Kandahar that have essentially fallen to the Taliban.

Q: Where do you see the logic then? It doesn't sound like you believe this should have been the primary focus. Do you at least see it as maybe just one step before looking at Kandahar?

And the Marines have done quite effective job in pacifying what was a province with the highest amount of Taliban presence. But at the end of the day what matters to the Taliban is Kandahar and that obviously is going to come next. But we'll see how that goes.

This is a modified transcript of an interview that aired on CNN's "Saturday Morning" program.