The UK Ministry of Defence released some photos of troops beginning Operation Moshtarak in Marjah, Afghanistan.

END_OF_DOCUMENT_TOKEN_TO_BE_REPLACED

On any battlefield, breaching enemy defenses is often the most arduous and deadly part of an offensive. That's especially so when the enemy has had plenty of time to plant minefields or hide IEDs – improvised explosive devices.

So the U.S. Marines – as they move on the Taliban in the Marjah district of Helmand province – are giving thanks for "the Breacher," the latest generation of mine clearance vehicles. Its full name is the Assault Breacher Vehicle and it looks like a cross between a bulldozer and a tank with a set of deadly steel teeth. Which it is: its frame is based on the A1M1 Abrams battle tank, while its plow was developed by a British company and can tear up the dirt to a depth of 14 inches. END_OF_DOCUMENT_TOKEN_TO_BE_REPLACED

HELMAND PROVINCE, Afghanistan –NATO troops in Afghanistan launched their biggest offensive of the war early Saturday, attacking what they call the last Taliban stronghold in a war-scarred southern province.

Military officials said the offensive—dubbed Operation Moshtarak— got under way at 2 a.m. (4:30 p.m. ET Friday). By about 8 a.m. (10 p.m. ET Friday) two firefights had erupted between the Taliban and U.S. Marines in Marjah.

The offensive turned a main bazaar near the city center into a ghost town after residents were warned to leave the area. NATO forces said they are following a directive not to shoot at civilians, some of whom are still on the streets.

"Insurgents who do not accept the government's offer to reintegrate and join the political process will be met with overwhelming force," the International Security Assistance Force Joint Command said in a statement. "However, the strongest of measures will be taken to protect the civilian population." END_OF_DOCUMENT_TOKEN_TO_BE_REPLACED

Around the Web: Marjah after the fight

Dexter Filkins of the New York Times reports that the “real test” in Marjah may lie after the fighting comes to end.

“For much of the past eight years, American and NATO forces have mounted similarly large military operations to clear towns and cities of Taliban insurgents. And then, almost invariably, they have cleared out, never leaving behind enough soldiers or police to hold the place on their own,” Filkins writes.

“And so, almost always, the Taliban returned — and, after a time, so did the American and NATO troops, to clear the place all over again.”

END_OF_DOCUMENT_TOKEN_TO_BE_REPLACED

KABUL, Afghanistan - Afghan and international forces gearing up for a major offensive in Helmand province dropped leaflets Friday warning people not to give shelter to the Taliban.

Daud Ahmadi, the spokesman of Helmand province, said the leaflets fell in and around the city of Marjah - a Taliban stronghold.

"Do not allow the Taliban to enter your home," the leaflet said, according to Ahmadi.

The push on Marjah is touted as the largest of the eight-year-old conflict, and commanders want to oust militants and are planning for tough urban warfare in a rugged area expected to be filled with roadside bombs and booby-trapped houses. END_OF_DOCUMENT_TOKEN_TO_BE_REPLACED

MADRID, Spain – The Spanish government will send up to 511 more troops to Afghanistan for the NATO-led security force, pending approval from parliament, the Defense Ministry said Friday.

The move was expected after Socialist government officials here recently discussed possible troop increases in response to requests, including from the Obama administration in the United States, for additional troops to fight the Taliban. The increase would boost Spain's overall troop level in Afghanistan to 1,600, a Defense Ministry spokeswoman told CNN. END_OF_DOCUMENT_TOKEN_TO_BE_REPLACED

U.S. vs. Afghanistan in cricket

Teams from the United States and Afghanistan battle it out on the cricket field for a chance at the World 2020 Championships. 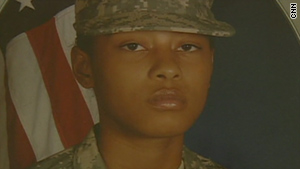 A single mother who chose taking care of her infant over deploying to Afghanistan has been discharged, the Army said in a statement. When her unit deployed to Afghanistan in November, Alexis Hutchinson was missing from the plane. Her lawyer said she refused to go because there was no one to take care of her then 10-month-old son, Kamani, and she feared he would be placed in foster care.

But the Army contended that the young mother and now former Army specialist had plenty of time to sort out family issues and said she could face court-martial. The issue was resolved this week, the Army said in a statement Thursday from Fort Stewart in Georgia, where Hutchinson was training. END_OF_DOCUMENT_TOKEN_TO_BE_REPLACED

New military campaign on the Web

In trying to allow the world to see and understand what NATO forces are going through on the ground in Afghanistan, the U.S. military has launched a new Web site, 30 Days Through Afghanistan.

The bodies were discovered during an operation by Afghan and NATO-led forces in Paktia province, a volatile region along the border of Pakistan. NATO's International Security Assistance Force said the bodies of two men and two women were found, with the women bound and gagged, and the U.S. official said the people were shot "execution-style."

An honor killing is a murder carried out by a family or community member against someone thought to have brought dishonor onto them. The U.S. official said it isn't clear whether the dishonor in this case stemmed from accusations of acts such as adultery or even cooperating with NATO forces. END_OF_DOCUMENT_TOKEN_TO_BE_REPLACED