U.S. and Afghan commanders flew from base to base in central Helmand Tuesday attempting to fire up both Afghan and U.S. troops for the upcoming operation in Marjah.

Operation Moshtarak, the word for "together" in Dari, is expected to be the largest NATO operation since the war began in 2001.

And it’s said to have the largest Afghan National Army presence in any military operation to date. (WATCH American and Afghan forces gear up)

But he is confident that the time is right.

"All I know is that we have done everything we can to prepare, and on the eve of this operation I think we’re ready." END_OF_DOCUMENT_TOKEN_TO_BE_REPLACED

Around the Web: The fight in Marjah 'could be brutal'

The fight for Marjah could be “brutal,” writes Mark Thompson of Time magazine.

“The offensive, when it begins in earnest, will largely be conducted on foot. That's because the terrain surrounding Marjah is latticed with canals built by the U.S. a generation ago to expand agriculture to 250,000 acres in the Helmand River valley. It also gave the region the nickname "Little America." The canals and ditches created a network of bridges unable to support armored vehicles and gives the Taliban good places to hide IEDs — the top killer of U.S. troops in Afghanistan — and snipers. They also turned the region into lush farmland that has proven ideal for growing opium-producing poppies,” Thompson writes.

“Both sides predict the fight for Marjah could be brutal, with belts of IEDs believed to be buried along all major approaches to the town. Unlike earlier battles over towns and villages further east, where many Taliban are from Pakistan, the enemy in Marjah is largely local, which will further complicate the fight. ‘It's harder to separate the enemy from the people,’ a Pentagon planner says, ‘when they are the people.’”

END_OF_DOCUMENT_TOKEN_TO_BE_REPLACED

Mehsud died near the city of Multan while on his way to a treatment center in Karachi, the sources said.

It was not immediately clear why he was going to the treatment center.

Authorities have been looking into reports that Mehsud died after being wounded last month in a drone attack.

Word of his death contradicts a statement by a Taliban spokesman last week that Mehsud was alive and in hiding.

At least 167 killed in Afghanistan avalanche

UPDATED 2/11/2010: The death toll from a series of avalanches that struck a mountain pass in northern Afghanistan has risen to 167, with hundreds more wounded, authorities said Thursday. At least 2,100 people have been rescued, said Abdul Basir Salangi, governor of Parwan province.

UPDATE: 2/10/2010: Authorities recovered more than 150 bodies Wednesday from a mountain pass in northern Afghanistan that was struck by a series of avalanches.  More than 100 others were wounded and 13 vehicles remained buried under snow three days after the avalanches hit the Salang Pass on Monday, the country's disaster management agency said.

KABUL, Afghanistan – At least 60 people were killed and 60 others injured in an avalanche in a key tunnel in the Hindu Kush mountains connecting northern and southern Afghanistan, an Afghani official said.

More than 40 vehicles have been buried since the avalanche happened Monday morning in the southern part of the Salang Tunnel, said Abdul Matin Adrak, Afghanistan's director of disaster management.

The International Security Assistance Force was attempting to fly victims out in helicopters to hospitals and other safe places, Adrak said. The Afghan National Army, police, Ministry of Health and disaster department staffs are
all working to clear roads and rescue victims still buried, he said. 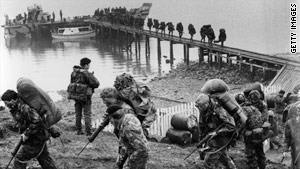 The death of a British soldier on an explosives-clearing operation in Afghanistan has pushed the British death toll there past that of the 1982 Falklands War, the Ministry of Defence announced Tuesday.

The soldier's death brings to 256 the number of British troops killed in Afghanistan since operations there began in 2001, the defense ministry said. The British death toll from the Falklands conflict was 255.

The soldier, from the 36 Engineer Regiment, died Monday from an explosion in the Nad-e-Ali district of Afghanistan's southern Helmand Province. He was part of a task force to clear roadside bombs.

"He was leading a team conducting route-clearance operations at the time, making the way ahead safe for others to follow," said Lieutenant Colonel David Wakefield, a spokesman for Task Force Helmand. "His indomitable courage and fortitude, the hallmark of his profession, will not be forgotten."

The Ministry of Defence did not release his name, but said his next of kin had been informed.

Two soldiers from The Royal Scots Borderers, 1st Battalion The Royal Regiment of Scotland, were killed by an explosion Monday, also in Helmand Province, the defense ministry said. The deaths of those soldiers, whose names were not released, meant the total death toll matched that of the Falklands.

"Sad milestones such as this naturally attract attention in the U.K., but in theater our people continue resolutely and courageously with the task of assisting Afghans to build their own future," said Air Chief Marshal Jock Stirrup, chief of the British Defense Staff.

"We should not forget that each and every death of a member of our armed forces is a tragedy of equal proportion," British Defense Secretary Bob Ainsworth said. "Our thoughts at this time lie firmly with the families and friends of all the brave men and women fallen in Afghanistan, and we should all

remember that every one of them has given their lives in defense of their - and our - country."

The Falkland Islands are a British territory located 670 miles (1,000 kilometers) from the coast of Argentina. Argentina has claimed sovereignty over the islands since they were occupied by the British in 1833.