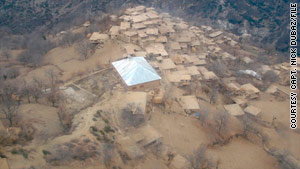 An investigation into an attack that killed eight U.S. troops in eastern Afghanistan last year said the combat outpost was an "attractive target" because protection improvements hadn't been made and intelligence assets had been diverted.

These were main points in the findings released Friday by the U.S. military into the probe of the October 3 attack on Combat Outpost Keating in the Kamdesh district of Nuristan province.

The attack killed eight U.S. service members and wounded 22 others.

Read more on the attack

Around the Web: U.S. strategy and Afghan tribes

The U.S. strategy to turn around the war in Afghanistan by winning over tribes is a “risky one,” reports McClatchy’s Thomas Day.

“Afghanistan's historically weak central governments have shared power with the country's five so-called "super-tribes" and the tribes that compose them, with 350 or so sub-tribes and with local clans, and most of the country's would-be conquerors — including the British and the Soviets — have employed their own tribal strategies,” Day writes.

“Now American officials are attending tribal meetings, staying in close touch with tribal leaders and trying to determine which leaders are friendly and which aren't,” he reports. “Those efforts, however, risk feeding traditional tribal rivalries, to the detriment of any plan to undercut the Taliban.”

END_OF_DOCUMENT_TOKEN_TO_BE_REPLACED

The service is being held at CIA headquarters in Langley, Virginia.

Although the press has been allowed into CIA events in the past, no members of the media are being allowed at this event in order to protect the identities of the members of the clandestine services.

"The memorial ceremony is closed to the press due to the presence of a large number of undercover officers," CIA spokesman George Little said.

Read more about the memorial

ISLAMABAD, Pakistan (CNN) - A blast targeting a bus filled with Shiite religious observers in Karachi killed at least 12 people Friday, and another explosion in front of a hospital where attack victims were being treated killed six more, a government official said.

Motorcycles were used in both assaults, police said, and they came during the Shiite observance of Arbaeen. The commemoration takes place 40 days after the anniversary of Imam Hussein's death, which is known as Ashura.

Sindh provincial health minister Dr. Saghir Ahmed said that along with the 12 dead, 30 people were injured in the first blast.

The second blast happened in front of the emergency room at Jinnah Hospital, where doctors treated people from the first attack and people on stretchers were waiting to be taken into the crowded facility. Along with the six slain, five people were wounded.

The last deadly blast in Karachi took place during Ashura in late December, when more than 40 people were killed.

Why is the military publicizing its upcoming operations in Afghanistan?

WASHINGTON (CNN) - When it comes to launching a major military operation, most would assume that preparations are done secretly so as not to tip off the enemy.

So how do the U.S., coalition military and Afghan government prepare for a major clearing operation to eliminate the Taliban from an insurgent stronghold? Talk about it publicly ahead of time.

For months now, one of the worst kept secrets in Afghanistan's central Helmand region has been the forthcoming operation to take back control of the poppy-covered and Taliban-held Marjah district in the restive central Helmand
province region.
END_OF_DOCUMENT_TOKEN_TO_BE_REPLACED