Past war offers Afghanistan lessons. And it's not Vietnam

As President Obama begins to send more of the 30,000 additional troops to Afghanistan in the new year, some critics are invoking those snapshots from history to argue that the United States can’t afford to get bogged down in another Vietnam.

But those snapshots actually come from another war: The Philippine-American War, which lasted from 1899 to 1902. The war is largely forgotten today, but it was a bloody preview of the type of warfare that the U.S. military faced in Asia and now in Afghanistan, historians say.

“It was the 19th century version of Vietnam,” said Edward Sheehy, a professor of military history at La Salle University in Pennsylvania.

There was, however, one big difference: The U.S. won. How did a far weaker U.S. military prevail in the Philippines and what lessons can Obama apply from that victory to Afghanistan today?

Historian: ‘It was a very savage war’
Obama faces the same challenge that American leaders faced at the start of the war in the Philippines: How to mobilize public support. A recent poll shows that Obama is already losing support for the war in Afghanistan. 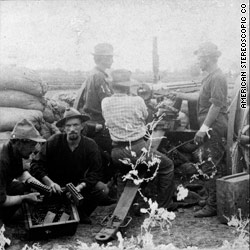 A CNN/Opinion Research Corp. poll released December 23, 2009, found that the majority of the U.S. public opposes the war, with 55 percent of respondents opposed and 43 percent in support of the U.S. mission in Afghanistan.

The war in the Philippines provoked skepticism among some Americans as well. For one, victory seemed implausible, said Paul Kramer, author of “The Blood of Government: Race, Empire, the United States and the Philippines.”

When they first started fighting, American soldiers struggled to adjust, Kramer said. Filipino guerillas attacked them and then blended in with the civilian population.

“American soldiers really found it disturbing and traumatizing. They didn’t know who was an enemy and who was an ally,” Kramer said.

Filipino nationalists declared their independence, ratified a constitution, and elected a president. But the United States claimed the land, seized the Philippines in February of 1899 and war erupted.

All war is brutal, but several historians and military experts say the war in the Philippines was barbaric, even by military standards.

Yet the United States won, in part, because it was willing to be brutal, some military historians say. According to an official State Department account of the war, at least 4,200 American soldiers, 20,000 Filipino combatants and as many as 200,000 Filipino civilians died from violence and famine during the war.

Filipino fighters deliberately sought to drag the war on with hit-and-run tactics that would turn the American public against the war, historians say. It was the classic guerilla strategy: Win by avoiding big, pitched battles and melt into the civilian population.

But the U.S. military responded to the guerilla strategy with a simple strategy of their own, some historians say: Kill them all.

Civilian casualties were not accidental, but intentional, says Lt. Col. Michael E. Silverman, an Iraq war veteran and a counterinsurgency training consultant for the U.S. Army.

“Victory there was achieved by a brutal strategy of near genocide. … Many of the officers and sergeants who fought the war were veterans of the Indian Wars and brought with them the idea from Gen. Philip Sheridan: ‘The only good Indians I’ve seen were dead.’’’

The U.S. military forced Filipino villagers outside of their villages into population centers where they could be separated from guerillas. They killed villagers’ livestock and torched crops, says John Hinshaw, a history professor at Lebanon Valley College in Annville, Pennsylvania.

“They were the same tactics that worked against the Plains Indians in the 1870s and 1880s,” he says

“We killed hundreds of thousands of people in the process. A lot of it was due to disease and starvation. It was a very savage war.”

How the U.S. overcame its internal divisions
The war ignited debate in America. Critics said America was behaving as a colonial power and denying Filipinos the right to self-government.

An Anti-Imperialist League was founded to lead protests against the war. Public figures such as Mark Twain, steel magnate Andrew Carnegie and three-time Democratic Party presidential nominee William Jennings Bryan spoke out against the war.

“People like Mark Twain were pointing out the Philippines was a country that had set up a republic modeled on the American Constitution, and we were basically saying you’re not ready for it,” says Hinshaw.

After three years, part of the American public began to grow disenchanted with the war. “The Forbidden Book,” a book that explored the racial and commercial justifications for the war, cited a 1901 New York Times editorial that declared: “The American people are plainly tired of the Philippine War. … Is it the lack of troops, supplies, transportation, ammunition and artillery? Is it the lack of a competent commander? How long is this Philippine War going to last?”

Despite the protests, political leaders in the United States were able to maintain support from most of the American public by employing several strategies, historians say. They told Americans they were in the Philippines to civilize and Christianize its inhabitants, historians say.

“They ignored the fact that most of them [Filipinos] were already Roman Catholic,” says Sheehy, professor from La Salle University.

Supporters of the war also squelched the voices of opponents by dismissing them as unpatriotic and effeminate “aunties,” historians say.

America’s political leaders also correctly read the mood of the country, historians say. Ordinary Americans wanted to flex their newfound military muscle and business leaders wanted to make money in Asia. Many Americans were aware that several European countries were also trying to gain control of the Philippines, according to Sheehy.

“There was this sense that we had to take our place in the world. If we don’t, someone else might.”

The United States also won because it didn’t just rely on military might. They found strong, local allies, historians say. They did so through a tactic called the “policy of attraction,” according to a State Department account of the war. Under the policy, the United States introduced social reforms, economic development and permitted some forms of self-government. The policy won over key elites and other Filipinos, the State Department says.

“It [the Scouts] allowed the American forces to declare war over long before the resistance was over,” Kramer says. “It frees American troops to come home. It got the war out of the American papers.”

The crucial question Americans face
History can teach but it also can mislead. Scholars and military experts concede that there are crucial differences between the Philippines and Afghanistan.

The Philippines had already been colonized by Spain before its war with the United States, while Afghanistan has resisted conquest by various nations for centuries.

The Philippines was, and still is, a majority Roman Catholic country, while Afghanistan is predominately Muslim. And the U.S. military was able to isolate the Filipino guerillas on several islands, while it’s more difficult to isolate the Taliban since Afghanistan shares a porous border with Pakistan, experts say.

Yet the U.S. still can learn several lessons from its war in the Philippines, scholars and military historians say.

One is what not to do. The U.S. military can’t employ the brutal tactics it once did against Filipinos in a world where there is a 24-hour news cycle, historians say.

“I don’t think we’re willing to do what it took back then and that’s a good thing,” says historian Hinshaw.

Perhaps the primary lesson from the war in the Philippines is that the United States must be willing to settle in for the long haul, said Dan Roberts, a Vietnam veteran and host of the public radio history program, “A Moment in Time.”

Though the war was declared over in 1902, American soldiers continued to die in the Philippines for 46 years - up to the onset of Word War II, Roberts says. The United States granted independence to the Philippines in 1946.

“I don’t think the U.S. wants to stay in Afghanistan for 46 years,” Roberts says. ”But that’s the way you do these things. You have to be willing to stay there and shed blood decade after decade.”