Around the Web: Reaction to Karzai's Cabinet picks

"You don't see technocrats in the cabinet list. Instead, it is mostly composed of former jihadis and previous ministers," says Gul Badshah Mujedi, a lawmaker from Paktia province, in the Journal report. "Parliament will only approve seven or eight ministers, and the rest will be rejected."

Matthew Green and Fazel Reshad of the Financial Times report that Afghans say they don’t have much faith in the ministers.

“The weekend decision by Hamid Karzai, Afghanistan's president, to favour continuity over sweeping reform in his new cabinet will improve his frayed relations with the west but do little to bolster support for a government weakened by entrenched graft,” they write.

Karzai defended the Cabinet picks at a press conference on Sunday.

"I can assure that all the newly introduced ministers, and those who have been with me in the past, will be held accountable on any issue related to corruption," Karzai said, according to a Reuters report.

"And I will be accountable before the nation of Afghanistan for preventing it (corruption) and for solving this problem."

END_OF_DOCUMENT_TOKEN_TO_BE_REPLACED

From the faces of the children: Will bloodshed ever stop?

The highway to Peshawar is fairly deserted.  As we get closer to the city, Pakistan’s rugged terrain gives way to farmlands, and then finally a colorful explosion of traffic and rickshaws.

Though only a 2 1/2-hour drive from Islamabad and all of its modern amenities, Peshawar is conspicuously more conservative.  Many women here are wearing burkas or only have their eyes showing underneath their hijabs. I reach up to my headscarf and make sure no offensive hairs have managed to slip out.

Read Arwa Damon's report on the children of Peshawar

We stop briefly in front of the ancient Bala Hisar Fort - erected at a time when Pakistan was in the midst of other wars, centuries ago. I snap a quick photograph.
END_OF_DOCUMENT_TOKEN_TO_BE_REPLACED 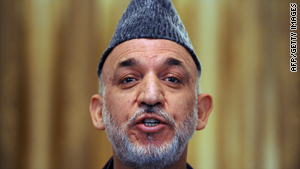 The announcement, made live on state-run television, named 23 of 25 ministers. The ministers of foreign affairs and the disabled have not yet been named.

From castle to military base

British troops get new camouflage based on Afganistan's terrain

British troops will get new camouflage uniforms for the first time in more than 40 years, based on computer modeling of Afghanistan's terrain, the Ministry of Defence announced Sunday.

The "multi-terrain pattern," as the military has dubbed the new design, is the first new pattern from the Ministry of Defence since 1968, it said.