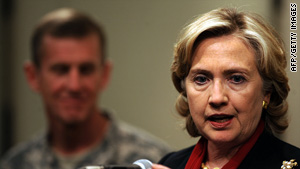 U.S. Secretary of State Hillary Clinton said Thursday that she is pleased by Afghan President Hamid Karzai's pledge to have the country's security forces take the lead over the next few years.

Speaking to U.S. and allied troops in Afghanistan, Clinton said the United States and other contributing nations have to do "everything we can to create the capacity of the Afghan government and the Afghan people to protect themselves."